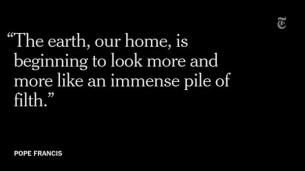 No beating about the bush.

The pope and climate change

The Pope is calling for action on climate change. Naturally, he is being attacked for it.

Pope Francis has created a stir recently.  He has been instrumental in the ending by the United States of sanctions against Cuba, he has criticised the Curia for being inwardly focussed and not sufficiently concerned for the poor and he has reached out to Muslims.  And to top things off he is intending to issue a Papal Encyclical on climate change and will be urging countries to enter into a meaningful agreement on climate change.