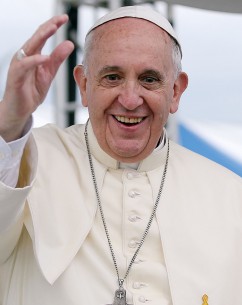 The ranks of Aotearoa’s trade unions and leftie movements including the Labour Party are full of catholics, most of them lapsed. It is something about the combination of the new testament preaching that we should address poverty and love one another and drive the money changers from the temple that obviously strikes a vein with us, yours faithfully included.

The Labour Party originally included the support of many Irish Catholics. Peter Fraser, Bob Semple and Paddy Webb amongst others, went to jail for their opposition to the first world war or to conscription based in part at least on their view that the English, who had just fought with the Irish, did not deserve or justify support. If you want to get a feel for the time have a read of this.

The Catholic Church has always had this undercurrent of radicalism. But thanks to the clogging hysteria of the conservative clergy it was often opposed to progressive change, rather than supportive of it.

The latest head of the Church, Pope Francis aka Jorge Mario Bergoglio, is trying to change all this.  He is the first Pope from Latin America. He was previously a Chemical Technician and a Nightclub Bouncer but became a Priest at the age of 33 and since then has dedicated his life to God.

Wikipedia records that throughout his life he has “been noted for his humility, his concern for the poor and his commitment to dialogue as a way to build bridges between people of all backgrounds, beliefs and faiths.”

He has been creating a stir lately. The Guardian has been following his actions closely.  He has held out a hand to Muslims, he has suggested that the Catholic Cardinals are failing in their obligation to live frugal lives, he has been instrumental in ending the United States blockade of Cuba and he is in the process of urging Catholics world wide to do something about climate change.

As part of his Christmas Message he called for Jesus “to look upon our brothers and sisters in Iraq and Syria, who for too long now have suffered the effects of ongoing conflict and who, together with those belonging to other ethnic and religious groups, are suffering a brutal persecution.”  He also appealed to God “to give comfort to the families of the children who were killed by the Pakistani Taliban at a school in the city of Peshawar”.

In perhaps his most radical and challenging statement just before Christmas he talked about the fifteen ailments that had affected the Vatican’s bureaucracy.  The Vatican sounds like it has its own version of Dirty Politics happening.  According to the Guardian:

Chief among the pope’s list of sins was the “terrorism of gossip”, which he said could “kill the reputation of our colleagues and brothers in cold blood”. He denounced the “pathology of power” that afflicts those who seek to enhance themselves above all else, and the “spiritual Alzheimer’s” that has made leaders of the Catholic church forget they are supposed to be joyful.

Francis, the first pope born in the Americas, has refused many of the trappings of office and made plain his determination to bring the church’s hierarchy closer to its 1.2 billion members.

To that end, he has set out to reform the Italian-dominated Curia, the Vatican’s civil service whose power struggles and leaks were widely held to be partly responsible for Benedict XVI’s decision last year to become the first pope in six centuries to resign.

In his Christmas greeting, Francis used biblical references to condemn the “disease” of feeling “immortal and essential”.

“Sometimes [officials] feel themselves ‘lords of the manor’ – superior to everyone and everything,” he said.

“These and other maladies and temptations are a danger for every Christian and for any administrative organisation … and can strike at both the individual and the corporate level”.

In relation to Cuba he played a major role in ending the blockade.  He sent letters to the leaders of both countries urging them to end the blockade, was instrumental in resolving the issue concerning the exchange of prisoners, and then the Vatican hosted a meeting between the parties in October at which time most issues were resolved.

Climate change may present his most difficult challenge.  He wants to persuade the world to enter into a meaningful agreement.  As reported in the Guardian:

But can Francis achieve a feat that has so far eluded secular powers and inspire decisive action on climate change?

It looks as if he will give it a go. In 2015, the pope will issue a lengthy message on the subject to the world’s 1.2 billion Catholics, give an address to the UN general assembly and call a summit of the world’s main religions.

The reason for such frenetic activity, says Bishop Marcelo Sorondo, chancellor of the Vatican’s Pontifical Academy of Sciences, is the pope’s wish to directly influence next year’s crucial UN climate meeting in Paris, when countries will try to conclude 20 years of fraught negotiations with a universal commitment to reduce emissions.

“Our academics supported the pope’s initiative to influence next year’s crucial decisions,” Sorondo told Cafod, the Catholic development agency, at a meeting in London. “The idea is to convene a meeting with leaders of the main religions to make all people aware of the state of our climate and the tragedy of social exclusion.”

The pope intends to issue a Papal Encyclical, an importantly ranked document distributed to Bishops, urging all catholics to take action against climate change on moral and scientific grounds.

He sees the links between poverty and environmental devastation:

In recent months, the pope has argued for a radical new financial and economic system to avoid human inequality and ecological devastation. In October he told a meeting of Latin American and Asian landless peasants and other social movements: “An economic system centred on the god of money needs to plunder nature to sustain the frenetic rhythm of consumption that is inherent to it.

“The system continues unchanged, since what dominates are the dynamics of an economy and a finance that are lacking in ethics. It is no longer man who commands, but money. Cash commands.

“The monopolising of lands, deforestation, the appropriation of water, inadequate agro-toxics are some of the evils that tear man from the land of his birth. Climate change, the loss of biodiversity and deforestation are already showing their devastating effects in the great cataclysms we witness”.

But it is anticipated that his evangelical zeal to do something about climate change will raise opposition within Christianity, particularly amongst the conservative Christian movements in the United States.

The Guardian article quoted Calvin Beisner, who is spokesman for the conservative Cornwall Alliance for the Stewardship of Creation.  This organisation has declared the US environmental movement to be “un-biblical” and a false religion.  According to the article Beisner has said:

“The pope should back off. The Catholic church is correct on the ethical principles but has been misled on the science. It follows that the policies the Vatican is promoting are incorrect. Our position reflects the views of millions of evangelical Christians in the US.”

The Alliance looks like it has funding from the anti environmental movement to push a particular christian message.  I am still trying to work out how an organisation whose members believe in creationism can lecture the Pope that he is wrong on the science of climate change.

But all strength to Pope Francis.  If he keeps this up I may think about going back to church!

54 comments on “The Socialist Pope ”