On Wednesday, Herald columnist Rachel Stewart wrote a disingenuous and deliberately provocative piece about her distaste for trans people. It was dressed up, in part, as supposedly sensible outrage at the thought that trans women (or ‘men’ as Rachel prefers to call them) might use the changing rooms and toilets that they feel most comfortable in, thereby potentially scarring her six year old niece for life.

Yes, I swooned, too. The horror, the horror!

Louisa Wall, the Labour MP and sponsor of the legislation that bought marriage equality to NZ has written a spirited and sensible riposte.

The MP points out that Rachel Stewart’s propaganda mirrors Donald Trump’s moves in the States to narrowly define sex as determined at or by birth and based on the gender a person is born into. It’s a conservative and privileged point of view.

Wall makes the point that Stewart and anti-trans groups like Speak Up For Women are regressive:

“The result of Civil rights protections for transgender will be lost along with recognition of gender identity.

While that is ultimately what Speak Up For Women and Rachel Stewart want here in New Zealand, I despair that as we make steps toward greater trans visibility, campaigns like these undermine the work done and give messages to our trans whanau that will have detrimental consequences for our trans community, and particularly trans youth.

All as a result of a small but vocal group that considers themselves more important than a group that is the most oppressed, marginalised and dehumanised, suffers some of the highest levels of sexual and physical violence and (whose) youth are five times more likely to attempt suicide.”

That’s not an exaggeration. I can’t think of any identifiable group in NZ who are doing it tougher. And it must be extraordinarily painful to have someone who could and should be an ally put the boot in.

But that’s what Rachel Stewart has done.

One of the weird things about the overwhelmingly negative reaction to Stewart’s bigotry is her failure to accept even a jot of criticism. On the twitter, she’s turned into a passive aggressive snowflake, blocking anyone who has tried to reason with her.

I guess I’m next, if she reads the Standard. And that would be a shame, because I have a ton of respect for the work Stewart has done poking the lazy and self important in the farming industry over their polluting ways.

However, Rachel Stewart has got this badly wrong.

In an interview a few years back, she said this:

“I just lose it when it comes to people being cruel to animals, or just cruel actually”

Oh, and from that same article, here’s an equally ironic quote about the time she worked for NZ Rail:

“When they tried to post her to Wellington because they didn’t know how to manage a woman driver in a regional depot, and because they’d have to build her a toilet, she rang up the Human Rights Commission, who advised her on the best way to tell them to get knotted. She won, and stayed in Whanganui, where they built her a toilet, even though she said she was happy to use the blokes’ one.”

Good thing her six year old nephew wasn’t around to see that ae?

The horror, the horror.

I had a brief twitter conversation with Rachel Stewart this morning. She denied that she intended blocking me. I offered her a right of reply to the post because she had complained that the post was full of misquotes and lies. It’s not, but I thought it was fair to let her put her point of view. She replied with some low level abuse.

I replied, chiding her for ‘liking’ a racist attack on me by Denny Paoa. She replied, further endorsing Denny’s tweet and used another racist slur “Uncle Tom”. Then Rachel, as is her way, blocked me.

My feeling is that she blocked me not because of the post but because she realised she’d made a serious mistake resorting to racist abuse.

If that isn’t the case, the offer of a right of reply remains. But I really do think Rachel Stewart needs to explain why she thinks racist abuse is acceptable in 2018. 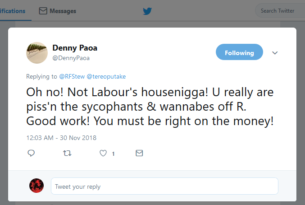