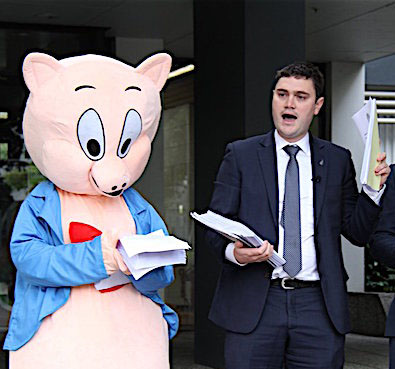 This week in the Auckland High Court the Free Speech Coalition has been seeking a review of Auckland Council’s decision to not allow a couple of click for profit shock jock fascists use of a Council facility.

Matthew Thunissen at Radio New Zealand has the details:

For the past two days room eight in Auckland’s High Court has been home to some of the country’s notable right-wing figures, who are bent on affirming the speaking rights of two controversial Canadians.

It seems all the best people were there.

The man behind the Orewa speech, Don Brash, made an appearance yesterday, and Jordan Williams from the Taxpayers’ Union has been listening intently in the public gallery, a few seats down from a man in a MAGA (Make Ardern Go Away) hat.

Old Conservative Party leader Colin Craig also poked his head around the door at one point, although he was in the building for another reason – to face defamation action brought by a former party colleague.

What a collection of human right warriors. Don Brash who once sought a super injunction trying to prevent the publication of a book about him and who has a major problem with free speech if it is in Te Reo, and Jordan Williams who sued Colin Craig for saying not nice things about him.

The Free Speech coalition is being represened by Queen’s Counsel Jack Hodder who is very good and not cheap.  Jordan Williams says that the exercise has cost about $200,000 so far.

One part of the article that made my jaw drop was Williams claiming that he did not know what the views of Southern and Molyneux were.

Speaking outside of court, Mr Williams told RNZ he knew nothing of the views of Ms Southern and Mr Molyneux, and was only taking this action to overturn what was a dangerous precedent.

So he has no idea what they are going to say yet is happy to spend large amounts of money to allow them to say it? You would think that it would be important to find out what they are actually going to say just to make sure that their speech deserves to be protected.

Let’s take this to the logical extreme.  Bear with me, lets say that a white supremacist writes a manifesto setting out why Muslims are evil and he then goes out and kills 51 of them.  Do you think in a civilised society we should allow his views to be publicly available, especially because there is a risk he may inspire others to do something similar?

Should all speech be protected? Somehow I don’t think so.

I have in the past analysed Southern’s thoughts and views.

Last year I said this:

She appears to have a certain way of conducting her business as a self confessed journalist and vlogger.  She goes places, says really controversial stuff, hopes to pick a fight, claims to be a victim and then leaves.

Her views are pretty extreme.  She once said that Adolf Hitler “was just an SJW [social justice warrior] who happened to get freaky amounts of power”.

For instance here she is picking a fight at an anti facist protest in London.  It was all filmed in detail.

The overwhelming impression that I received after watching it was that she was only after clicks.

And here she is insulting a group of women protesting against rape culture. Her lack of understanding and sensitivity is mind boggling.[youtube https://www.youtube.com/watch?v=7Qv-swaYWL0?version=3&rel=1&fs=1&autohide=2&showsearch=0&showinfo=1&iv_load_policy=1&wmode=transparent width=480]

Such was her commitment to personal freedoms she took part in a seaborne campaign designed to stop refugees who were stranded at sea from being rescued.  She was happy for them to drown.

Molyneux’s views are very similar.  He is that stupid he believes that white people are innately more intelligent than other people.

He appears to have a major problem with women:

And his climate change views are Alex Jones quality.

The best description of this ongoing saga belongs to Dovil on twitter: It seems almost inevitable that the case will head to the Court of Appeal.

70 comments on “The Free Speech Coalition goes to court ”