The Green Party on the Mosque murders

I have a really soft spot for the Green Party.  If it was not for tribal hard wiring of my genetic makeup I could quite possibly be a member of the  Green Party.

Their analysis of the environmental catastrophe that we are facing and their determination to do something about it resonate.

Which is why I struggle with the treatment of the Green Party by the Daily Blog.

Theoretically TDB should be to the left of the Standard.  We are relatively middle of the road with a left tinge.

But TDB tends to be negative in its commentary about the Green Party.  Maybe Martyn Bradbury is spending too much time with Sean Plunkett and Damien Grant. Maybe Chris Trotter is blogging too much on Whaleoil.

Whatever it is I don’t get it.

Trotter’s latest effort is to get stuck into Marama Davidson and Golriz Ghahraman about what I am not sure.

He starts off with a historical lesson about the Alliance.

He complains about what he says was Jim Anderton’s craven surrender to the right post 9/11.

My honest impression is that Anderton was never really a left winger and the breakup was caused by personality difficulties of which Afghanistan was merely the last straw. Anderton was opposed to Rogernomics, good on him, but he started off being an alternative leader to and to the right of David Lange.  When Lange was dragged to the right by his so called friends Anderton tacked left.

Trotter then says this:

Why is any of this relevant to the Greens? Because, in the aftermath of another terrorist attack, this time against the Muslim community of Christchurch, New Zealand, another radical faction, in another small but highly successful progressive party, again appears determined to compromise another Labour Prime Minister’s domestic and international responses to an appalling terrorist outrage.

Davidson and Ghahraman need to ask themselves what the reaction of their parliamentary colleagues is likely to be if it becomes clear that their determination to leverage-off the Christchurch Mosque Shootings to unleash an uncompromising anti-racist campaign encompassing the whole of Pakeha New Zealand, is met with a strong enough push-back to jeopardise the Greens chances of remaining in Parliament after 2020? Will the other members of the Green Caucus meekly accept that two of their number must be permitted follow the dictates of the consciences, regardless of the damage they are inflicting on their party? Or, will they attempt to stop them?

So are Marama and Golriz really attempting to leverage off the Christchurch Mosque Shootings to unleash an uncompromising anti-racist campaign encompassing the whole of Pakeha New Zealand?

I found out this morning, that a Pākeha man asked a kura kaupapa group of kids to stop singing the anthem in te reo on Friday, while they were sharing their aroha and grief at a mosque. This kura had been visiting the mosque every day, with love and waiata.

We can be a land that does not foster this type of ignorance and racism. Tamariki should feel absolute pride in sharing their reo, especially when using it to build bridges with other communities. I know that the Muslim community have been nothing but grateful for all the tikanga that Māori have used to show aroha directly to them.

We need everyone – Pakeha, tangata whenua, Pacific, Asian and all communities of colour, people across all faith groups – to create a nation free of this fear of different languages and customs and world views. We have to share and connect and build relationships with each other. And with the love rippling around the country right now, I have been encouraged by those who have started to reflect, and are feeling an urge to help dismantle those oppressions. I hope we can take that love, and can learn to listen.

This racism, this bigotry, has always been us.

But it doesn’t have to be.

Speaking as a pakeha male I was not insulted or upset by what Marama said.

White supremacy was not seen as a pressing threat, even as some in the Muslim community were.

Although this man happened to have not been born in New Zealand, we do need to acknowledge the truth that his ideology does exist in pockets here. Our ethnic communities, refugees, and tangata whenua have been telling us this for years. They’ve been reporting this for years.

I know it as my daily truth as a politician. I receive all the barrage of hate online. I receive the threats – the death threats, the rape threats, and the threats of gun violence, online.”

Every minority in New Zealand knows this as a little bit of our truth. So now we have to pause and listen.”

So she was talking about white supremacy, pockets of opposition, not white people per se.

Identifying one insensitive person or a clique should not be treated as attacking a whole race.

He came up with these stirring words:

Wonderful words.  All I can say in response is why did his party dog whistle so strongly on the UN convention of Migrant rights and against immigrants?

And if you need proof: 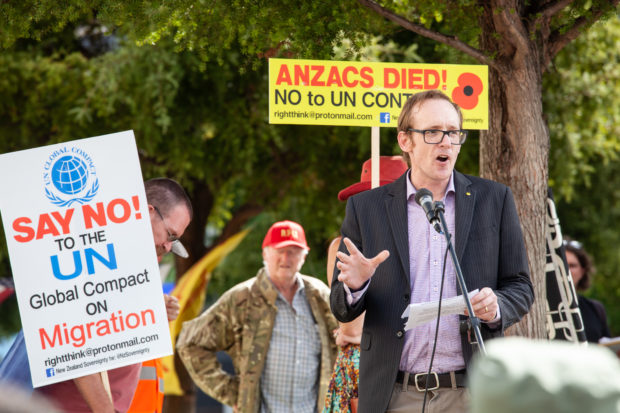 The Daily Blog and Trotter would be better placed identifying those who are opposed to our multicultural heterogeneous society.  And they are not the Greens.

194 comments on “The Green Party on the Mosque murders ”