The inside story of National’s civil war 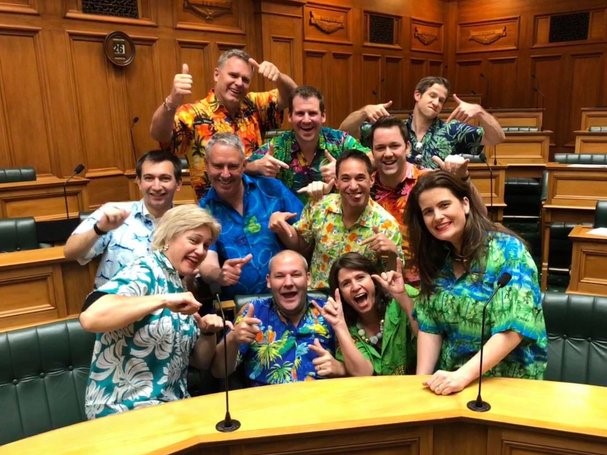 Andrea Vance has written a book about the extraordinary civil war that happened in National’s ranks from 2017 to now.

She has featured prominently as a reporter and has been prepared to attack the left as well as the right.  Quite often I have disagreed with her and there have been questions about her objectivity and allegations that she was running National attack lines.  On other occasions such as when her rights of privacy were shamelessly trashed by the last Government I have supported her.

Her book is a doozie, a deep review of National’s civil war with lots of internal comments, as befits a civil war whose main weapon was the media leak.  She spent some time interviewing former National MPs and staffers to build up a picture of what happened following the 2017 election and how National spectacularly imploded after then.

Her writing to me displays a perhaps unconscious bias to National.  She is too impressed by political games and appearances rather than the reality of how life for ordinary people decayed under John Key’s rule. And there are some jarring passages from the book. For instance at the time that Key told Nick Smith he was going to resign as Prime Minister she described the scene in this way:

Key was sitting in his lounge, white shirt-sleeves rolled up, and wearing a silk tie in National’s traditional blue.

Some of her comments are very telling for instance she claims that Steven Joyce said this at the time that Key’s replacement was being decided on:

Why the fuck not me?  I’m smarter than everyone else.  I’m better.”

She also speaks positively about Paula Bennett and says this:

Her Cinderella rise, vivacious character and love of leopard print made her one of the country’s best known politicians. But she was also polarising, with her hard line position on beneficiaries and controversial leaks to reporters seeing her attract vicious abuse.

Vicious?  Breaching the rights of beneficiaries to have their personal circumstances not used as a political weapon and the undermining of the standing of Te Puea Marae leader Hurimoana Dennis showed up the Government during a homelessness crisis are not things that should be praised, even by implication.  At the time I wrote:

About a 37 year old Jacinda Ardern Vance says this:

The 37 year old was unapologetic about her profile, but there was plenty of sniping (within both parties) about her inability to land a punch in her shadow portfolios, particularly justice and children, and her unsuccessful record against Nikki Kaye in Auckland Central.

Clearly in Vance’s view politics is and should be a blood match.

Bill English receives praise.  His decision to visit Bastion Point on Waitangi Day was described as a “thoughtful political calculation” while Andrew Little was described as “unpopular and crabby” who was “foisted on the caucus” by Labour’s leadership selection rules.

She presents Steven Joyce as some sort of economic miracle worker.  About his bogus claim of the $11.5 billion hole in Labour’s 2017 budget Vance thought the question of who was right was irrelevant.  It should be our media’s obligation to analyse and report on the veracity of such claims but not according to Vance.

There are some real clangers in the book, like Vance’s claim that Labour received donations from Donghua Liu.  Dear reader Labour did not.

The book also glosses over some really important points such as Trevor Mallard’s bastardry in calling for an inquiry into who leaked Simon Bridges’s travel information when he must have been sure that the leak came from within National’s ranks.  The inquiry caused National all sorts of problems.

Vance also gives far too much credence to statements from National operatives.  For instance she reports favourably National Press Secretary Rachel Morton’s statement that the National petition on the UN migration Pact, taken off the website by the emotional junior staffer, was archived rather than removed.

There are some fascinating quotes in the book:

And the highly secretive and protected party review on the 2020 election campaign was also leaked to Vance, as of course it would have.

The review’s conclusions are not hard to imagine.  Key’s strong management of the caucus caused resentment of the new recruits.  They never accepted the 2017 result where National lost and when the strong discipline was removed all hell broke loose. National’s caucus was described as “entitled and emboldened” which is a description that could apply to them at any time of the party’s existence but was particularly apt at this time.

The comments about Christopher Luxon are interesting.  He suffers from an “its so bloody easy disease, with a naivity about the realities of governing.”  His political analysis is described as “shallow” and he has a “tendancy to bag other business leaders”.  This is clearly what happened recently.

This site has a great number of posts detailing the back stabbing, the leaks, the scandals and the decline into chaos that occurred over the past few years.  It has been a great deal of fun. Vance has had the advantage of talking in depth to most of the affected until a cease instruction was issued by National’s hierarchy.  Unfortunately Christopher Luxon was one who declined to speak to her.

Some of the reviews of the book have been amazing.  Like this one by Steve Braunias in Newsroom.  Some of his comments are off the chart like this one:

Six National Party leaders in seven years, at least one of them lost their cotton-pickin’ mind, the best they can do right now is Christopher Luxon. You know all this but it’s an exciting read. You come for backstabbing, and Vance identifies the fingerprints. You come for naked power, and Vance shows the emperors without clothes or shame. You ought not come for a far-reaching intellectual analysis of political process. Journalism has its limits.

Blue Blood is the tabloid sequel to Nicky Hager’s Dirty Politics: some of the same cast of ratfuckers, another determined roll in the mucilaginous slime of the National Party, but this time told by a Stuff journo. Hager was an outsider, in whispering and high-minded cahoots with a hacker going by the mysterious nom de plume of Rawshark. As a reporter and a columnist, Vance works on the inside; she knows her subject, and has gained the trust of other insiders who share their insights into the National Party’s years of wildly entertaining collapse.

Braunias paints the characters in all their sordid weaknesses.  His description of Jami Lee is particularly brutal and particularly apt:

So many agitations were to follow; and no one agitated more than that singular agitator, he of the three first names, the batshit-crazy badass from Botany, last seen being thrown out like trash by Tova O’Brien (“You’re dreaming, mate!”), the dark star of Blue Blood, Jami-Lee fucking Ross.

Braunias’s description of Todd Muller’s reign and take down down is on steroids:

Poor old stunned Muller (quality pun courtesy of Claire Trevett at the Herald). Yet the book reminds us that he was also an arrogant sonofabitch who acted ruthlessly when he toppled Bridges, and deluded himself that he was a new Key. Muller wasn’t even a new Cunliffe. “I will bring my all to it,” he said, but his all was nothing. He was a complete bum from the moment he got the top job. Vance: “By 8pm on the night Muller took over the leadership he had retired to his Wellington flat for a meal of reheated chicken and coleslaw with Michelle. His team was incredulous. It was the most important day of his career, and he was knocking off comparatively early.” It was the Coleslaw of Doom.

I must admit that reading this book and blogging during these events has been so much fun.  There was this rich lode of leaked material which clearly indicated that the factions could not stand each other and would happily wreck the party just so the other faction did not succeed.

Things do appear to be different now.  National is more disciplined and focussed and the torrent of leaks has dried up.  But they are still vulnerable.  Christopher Luxon’s decline in his recent fortunes is due to the dual weaknesses identified in the book, his insistence that everything is easy coupled with his lack of understanding of the detail, and his tendency to bag business in an “I know better” manner.  This will not be easily solved or forgotten.

The United Kingdom Conservative Leadership campaign shows the basic problem.  There are far too many people in both caucuses who think they are natural leaders and who resent if their personal extraordinary capabilities are not recognised.

Anything will be tolerated if they are succeeding and hold power.  But at the first sign of failure the knives will be out.

Key deftly held the last Government together through a combination of success and his smiling assassin ability.  Cabinet Ministers were removed without hesitation and large numbers of MPs retired from Parliament without a fight.  It is clear that his succession plan was poor and once the smiling assassin had gone the children decided to play.

While National’s condition has improved the next 12 months will be interesting.  Based on historical events if Luxon falters I suspect the knives will again be out and the leaks will again start.

16 comments on “The inside story of National’s civil war ”