Labour’s conference in the weekend was a vibrant success and the main policy announcement on removing a tax incentive for property speculation was well received. But there was another conference that weekend, National’s in Northland. Seems it didn’t go so well. Richard Harman on the Politik blog:

Defensive Nats try to get their message across

National – in what was clearly a rehearsal for its election campaign – spent the weekend trying to get its message straight while it ironed out the bumps in the Government’s relationship with the electorate.

That meant one Minister, Alfred Ngaro, making a series of embarrassing gaffes for which he has now been admonished while another, Paula Bennett, conceded the Government was not getting its message across.

The party held the last of its regional conferences; this time in Auckland.

Meanwhile, behind the scenes elements of the party continue to ferment over the vote at the UN Security Council last December to oppose Israeli settlements on the occupied territories.

That concern was intensified after Prime Minister Bill English slapped down Foreign Minister Gerry Brownlee over comments he’d made which had appeared to back off the resolution.

Overall, to use a favourite Government saying, it was an “untidy” weekend capped by a flat speech from English which saw delegates ignore placards they’d been given to wave when he finished speaking.

Altogether it was an oddly jarring conference. ….

The B-team is missing John Key (what a pity he had to leave so suddenly). Read on for a lot more detail from Harman. Then try Simon Wilson on The Spinoff:

Don’t settle for Labour-lite, get the real thing!

This was the northern region conference. That’s Auckand and Northland. Did they produce an Auckland strategy? Nope. A major urban policy of any kind? Nope. That was astonishing.

English said it was now conceivable to think of a four-lane motorway from Whangarei to Matamata: as his sole contribution on transport, in this city, it was staggeringly irrelevant.

Steven Joyce defended the current high immigration settings as being essential to economic growth and, by implication, beyond debate. His list of key infrastructure was, in order: roads, ultra-fast broadband, railways, electricity transmission and rebuilding hospitals.

Paula Bennett talked in the session on crime about how worried she was about P. There were several Indian businesspeople in attendance, but the moderator, Pakuranga candidate Simeon Brown, was apparently unable to see them. The questions he took from the floor were almost entirely from the white folk in the room. 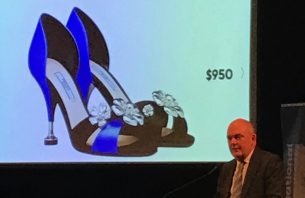 Steven Joyce was asked to give Paula Bennett advice on which shoes to buy (Photo: Simon Wilson)

What a hoot. I’m sure the poverty campaigners protesting outside would have laughed themselves sick (Newshub):

Protesters square up to police outside National Party conference

Around 50 Auckland Action Against Poverty representatives squared up to police in Mt Wellington, demanding a living wage and universal access to state housing.
…
Ms Cole says the protest was also to send a message to other political parties about the poverty “crisis”, and says current tactics to solve the issue are not working.

“We believe that social investment is not going to solve the crisis low income people are having. It ignores the root causes of poverty. People need income and work to have dignity.”

Yes. I guess the Labour-lite makeover isn’t going so well then.

26 comments on “The other conference ”