The states of John Key – Nasty side

Sixth of a series by Guest poster Blue.

John Key is not always the affable everyman he appears to be. There’s a solid streak of bully in him not uncommon in people who crave power.

Back in 2002, before he rose up the ranks of the National Party, he made his infamous comments about mothers on the DPB â€˜breeding for a business’. The Herald’s biography reveals that a more media-cautious Key has emerged since then, as demonstrated by the following quote:

Key admits to being more cautious about the phrases he now uses he likens it to being a magician with a magic wand. ‘You know, you don’t quite realise how powerful it is until you get to pick the wand up and you realise very small movements have quite strong and far reaching reverberations,’ Key explains. ‘My underlying philosophies remain the same.’ So his beliefs remain the same, the difference is in the language? ‘Yeah, I think that’s largely correct.’ This is a startling admission which suggests that the real John Key is actually the John Key who originally entered Parliament, not the version we see today. 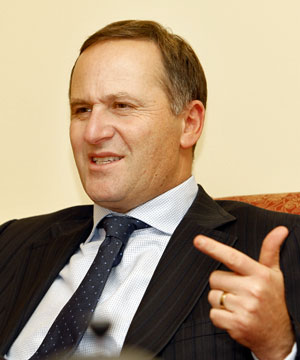 The new media-trained image isn’t completely infallible, however. Just before the last election, in November 2008, Key was heard to yell at a work rights activist who was heckling him, shouting ‘the truth is you’re an idiot!’

It’s not the only time Key’s careful brand image has slipped back in 2009 when he was addressing a business audience in Australia he denigrated actress Keisha Castle-Hughes‘ views on climate change, saying ‘my advice to Keisha is this stick to acting!’  There was no reason for him to bring up her opinion at all it was simply putting the boot in and mocking someone because he felt he could. He clearly didn’t expect it to get back to New Zealand asking the audience if they had even heard of Castle-Hughes. Unfortunately for him, also in the audience was journalist Claire Trevett from the New Zealand Herald.

It’s been noted by commentators that one of Key’s most effective weapons is to listen politely to someone’s objections and then agree with them, taking the wind out of their sails so he can move on, unmoved. However, his occasional outbursts show what happens when the salesman loses his cool and reveals a surprisingly vehement intolerance of anyone who disagrees with him.