It didn’t matter that the wage gap had opened up under National in the first place, or that it had remained steady and actually started to close under Labour. National assured the electorate that it was Labour’s fault and that they were going to fix it. 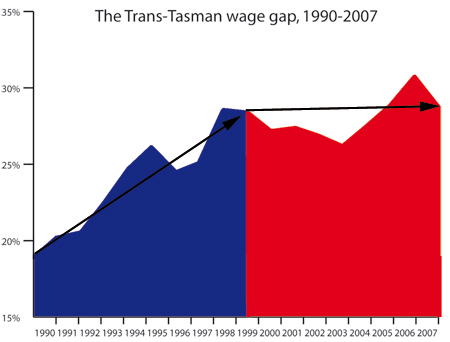 Of course, the authors writing on The Standard knew that National’s posturing about the wage gap was driven more by focus groups than any genuine concern. They called National on their dodgy figures while political reporters lapped them up uncritically. They explained that simply cutting taxes was no plan to lift incomes, and that National’s planned employment reforms would only dampen wages like we saw in the 1990s. There was post after post after post after post explaining that National had no plan to close the wage gap, and in fact its donors, its core supporters and its own neoliberal ideology favoured relative wage reductions rather than increases.

Sure enough, Claire Trevett reports in this morning’s Dom Post that the wage gap has in fact increased by $40 a week since National gained power.

The wage gap between New Zealand and Australian workers has widened by $40 to $580 a week since National came to power in late 2008 promising to address the income gap.

Economic Development Minister Gerry Brownlee yesterday claimed the gap in average wages was now less than it was when Labour left office in November 2008, after being questioned about it by Labour’s David Parker.

However, a comparison of average weekly earnings in November 2008 and February this year shows New Zealand wages grew by 5.2 per cent over that period while Australia’s grew by 6.7 per cent.

This is no big surprise, no abberation. Once in government, the party of big business was never going to strengthen workers and lift their wages to Australian levels (in fact, as we’ve seen in the last few weeks their instinct is quite the opposite.) The only amazing thing is how long National managed to get away with their spin and empty rhetoric before someone decided to call them on their bullshit.

[If you still believe National ever had a genuine plan to close the wage gap, take a look at Brownlee’s pathetic performance in the video below.]