Tony Veitch and the power of redemption

There has been some social media chatter about recent comments by broadcaster Tony Veitch.  Six years ago he was sentenced to nine month’s supervision, a $10,000 fine and ordered to perform 300 hours community service after pleading guilty to injuring with reckless disregard his former partner.

The contents of the police file are chilling.  Please note that many of the allegations were not tested.  But it does appear that the complainant had her back broken by the assault which he pleaded guilty to.  Clearly the level of violence was high.

The recent eruption occurred after Veitch shared a post on Facebook showing Welsh referee Nigel Owens with the words: “Not a punch just a push of the fist”, referring to an incident in the recent All Blacks v France game. Veitch added the comment “Haha still don’t get it…”

There was apparently some negative response to the joke which I have not read.  Veitch then posted this comment. 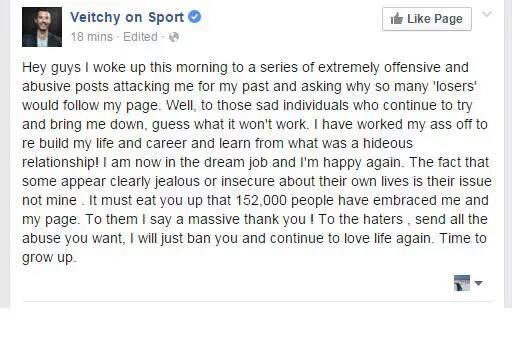 The lack of sensitivity and personal insight is utterly appalling.

Hey dude I guess some people are just utterly bewildered by your lack of personal insight and ability to reflect? You broke your partners back in four places and still, you have done no work to give back to places like women’s refuge or in anyway indicated you are remorseful. In fact you are making out, as if, you are the victim. You aren’t. You are a violent offender who got away with his crimes and have faced almost no consequences. What message do you think this sends to the public? And if a bit of verbal abuse is upsetting you maybe you could take some time to think about how it must have felt for Dunne-Powell when you hit and abused her? There is no courage in what you have done. You have no mana.

Allowing abusers with violent pasts to rebuild their lives, to honestly and deeply own what they did, to be forgiven by themselves and their victims, and to humbly rebuild their lives and commit to non-violent futures is essential in healing our country of the appalling rate of domestic violence.

Your comment Veitch shows none of this. None. You are NOT a victim here. You really aren’t.

Bomber Bradbury has posted on the issue.  Generally he talks about the need to protect the right to freedom of speech although he says that victims of social media pile ups should then try to understand why it has occurred and the cause of that anger.  Fair enough.

But he launches into this weird attack on Stephanie Rodgers and uses a six week old tweet as evidence.  He insults her competence and describes her as a failure.

For the record Stephanie still has a logon for the Standard and her posts are welcome.  Also for the record in my view she is one of the most talented political bloggers in the country and is capable of analysing and dissecting issues, particularly issues involving gender, in a way that few others are able to.

Clearly previous events have caused disagreement between Stephanie and Bomber.  But like Veitch perhaps Bradbury should try to understand what has occurred before attacking.

124 comments on “Tony Veitch and the power of redemption ”