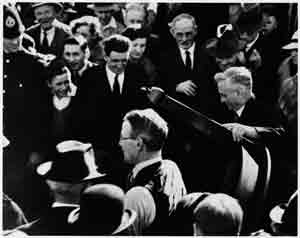 Further to ZKM’s post below it really was a great article last week from Chris Trotter on John Key’s weak National Party conference speech that asserts: A disastrous speech to the National Party conference puts an end to John Key’s honeymoon with the voters. I normally just link to the complete article but the online version of The Independent Financial Review appears to be subscription only. If you want the whole thing, I suppose you’ll either have to buy a copy, borrow a copy, or go to the library. The picture here shows Michael Joseph Savage helping to furnish the first state house, an image Trotter refers to below.

[…] The Leader of the Opposition’s clunking, cringe-making gaffe “Under the Labour government I lead” may have made all the television news bulletins, but it was only the most obvious manifestation of the woefully muddled thinking which plagued the entire speech.

How, for example, are the 700 people leaving the country every week for Australia to be turned around without a substantial lift in the salaries being offered to highly qualified Kiwis?

Affordable tax cuts will do nothing to impede the prime driver of skilled labour across the Tasman which is the knowledge that New Zealanders’ gross incomes are up to 30% lower, on average, than Australians’.

National would have to just about abolish income tax altogether to equalise the net income of the two workforces.

Similarly, the problem of falling productivity can only be tackled by breaking New Zealand employers’ reliance on low wages instead of the acquisition of more efficient plant and machinery for the maintenance of profits.

Once again, tax cuts provide no solution. Paradoxically, a rising minimum wage and effective union bargaining are the best guarantees of productivity gains.

But it was only when he got to the section on housing policy that the true extent of his speech-writers lack of talent became truly depressing.

“Back in 1936, when Labour was concerned with nationalising the means of production and advancing socialism,” Key dutifully recited, “the National Party was concerned with home ownership and standing up for wealth creation through a property- owning democracy…

“Unlike Labour, this issue is not new for our party.”

No party leader with even a rudimentary understanding of New Zealand history would have allowed this nonsense to make its way into an important speech.

The iconic photograph of Michael Joseph Savage carrying furniture into the first state house is one of the most potent images of New Zealand political history and continues to resonate powerfully in the nation’s emotional brain.

Private home ownership had failed New Zealanders in the 1930s, as bank foreclosures forced even respectable middle-class citizens into overcrowded hovels or on to the charity of relatives. The right’s record of “wealth creation” in that bleak period of our history was one of abandoned farms, silent factories and thousands unemployed.

There was something creepily Orwellian about Key’s Generation X speech-writers attempting to stuff the whole history of the welfare state in New Zealand down the memory hole.

It certainly wasn’t the act of mature political operatives. Indeed, it rather proved the truth of Cicero’s famous quip: “Not to know what has been transacted in former times is to be always a child.”

Key’s speech to the National Party conference was similarly childlike: not only because of the nervous and accident-prone manner of its delivery; nor even for the speaker’s obvious ignorance of his country’s past; but primarily for the insouciant assumption that having temporarily secured the affections of the electorate, nothing more was expected of him; that, like a favourite son, he could do no wrong. If nothing else, the week that followed will have disabused Key of that notion.