After small leads in a flurry of recent polls, Trump has overtaken Clinton on average polling for the first time:

Presumptive GOP presidential nominee Donald Trump has overtaken Democratic front-runner Hillary Clinton in an average of head-to-head national polls, according to the RealClearPolitics average of polls.

Trump leads Clinton by 0.2 percentage points, 43.4 percent to 43.2 percent in the average, overtaking the Democratic front-runner for the first time in the average of polls. 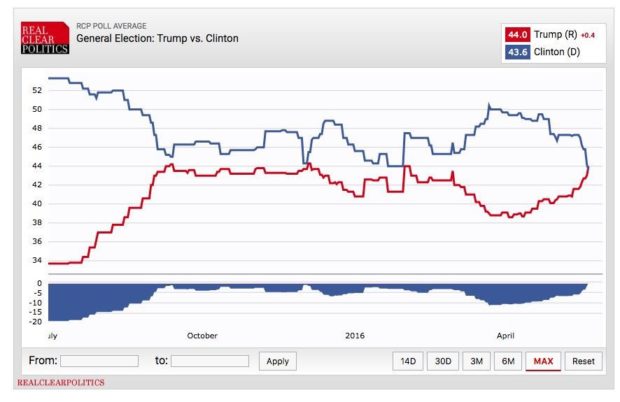 No need to panic just yet though:

What the media isn’t saying about their national polls showing Donald Trump leading Hillary Clinton is that they are worthless. A look at the past two election presidential cycles shows that the polls aren’t measuring what the media thinks they are measuring.

On a nearly daily basis, national polls are being released showing the presidential race as a tie or with Trump having a small lead over Hillary Clinton. The media are passing off these polls as the current state of the presidential race, but, in reality, what they are measuring is a small bump for Donald Trump that is coming from Republicans rallying around their nominee.

Here is a chart [not included] of a Gallup poll from 2008 showing John McCain leading Barack Obama, after he had clinched the Republican nomination while Obama and Clinton were in the final stages of the Democratic primary.

Like McCain, Trump has gotten a bump from winning his party’s nominee, while his likely general election opponent is still finishing up their primary.

After Rick Santorum had dropped out of the Republican race in April 2012, Mitt Romney led President Obama, 47%-45%. Romney got a second smaller bounce after officially clinching the Republican nomination in late May of 2012.

What is going to happen next is that Hillary Clinton will get a bounce of her own once she clinches the Democratic nomination. Clinton will likely get a second bounce when Bernie Sanders ends his campaign and endorses her. …

The numbers still say Trump will loose – too unpopular with big demographics. But the momentum that he has, and the endless media attention, is scary. It will be interesting to see if the poll lead flips back again as this second piece predicts.

62 comments on “Trump overtakes Clinton on average of polls ”