Trust, Labour and the TPPA

Action Station co-director Laura O’Connell Rapira wrote at The Spinoff the other day about the spin being used to push the TPPA:

And yet here I am, adding my own 700 words worth of political analysis to describe what has been a masterclass in ‘priming’ and ‘agenda-setting’ from Prime Minister Jacinda Ardern and the New Zealand Labour Party.

The message they are spinning? “Sorry voters, but we had to swallow the worst parts of the TPPA. It’s not our fault, it’s National’s.”

This is, of course, patently untrue. The Labour-led government doesn’t have to forge ahead with a subpar trade deal […]

They are choosing to push ahead with it. They just want us to think it’s not a choice.

Priming has its basis in cognitive psychology. It is about readying the public for a political decision using messages that foreshadow the outcome. It is about tapping into preconceptions to frame up the inevitability of your decision so the public accepts it more easily because they have been prepped for it.

It’s Jacinda Ardern commenting on the likelihood of successfully negotiating changes to the most toxic clause in the TPPA – investor-state dispute resolution, or ISDS – with this statement: “I do acknowledge it will be difficult [at] this late stage to achieve this outcome, but that will not stop us from trying.”

This is the tricky bit for me. The words often sound reassuring and have a feel good quality to them that Ardern is so adept at, but in the end I still don’t know what she means. Is she saying that they want to try but they know that it might not work and then they will walk away? Or is she saying they will do their best but might have to sell us into a really shitty agreement? Personally, it’s hard for me to imagine Labour will sign with the ISDS in place, because it would be such a huge betrayal, but the point is that I actually don’t know, none of us do.

This kind of communication has become such a common occurrence with the TPPA lately it’s starting to piss me off. Being skilful at leaving people feeling good while not being terribly clear is useful in an election campaign against an opponent that is lying through its teeth and getting away with it, but it’s wearing thin now that Labour are in power and we need them to be upfront and treating us as people worthy of honesty and clarity.

Here’s another example from a NewstalkZB piece last week,

A Japanese foreign official says any move to renegotiate the deal [on housing] could be the end of it altogether.

But Ardern evaded the question on Tuesday when asked if she’d be happy to carry the weight of responsibility if she pursues negotiations, saying it’s about balancing resolution of the housing crisis with exporter interests.

“I don’t see the two as mutually exclusive and that’s what I’m focused on,” she said.

I don’t know where the bottom lines are any more and it looks more and more like Labour are finding hacks to a situation that is basically broken. I can’t escape the feeling this is not going to be the new government’s finest hour. I’m angry because of the TPPA issues, but I’m also sad because if Labour fuck this up that’s the scene set for our shiney new government for the next three years. I really hope I am wrong.

O’Connell Rapira goes on to talk about agenda-setting in media and political theory and how in this case getting a win on housing allows Labour to stay in the TPP. She acknowledges that the Labour/NZF/G government is our best option to mitigate the TPPA that National intended, but that there is room for cynicism:

But as I was doing research for this piece, I went looking for a petition Labour had launched against the TPPA earlier this year. I found this:

The cynic in me says this is purposeful. The charitable digital campaigner in me hopes it’s just a glitch. Either way, it didn’t do much to reassure me that Labour will hold strong when it comes to the pressure they will face from business to finalise the TPPA, ISDS included.

There’s been a number of conversations on The Standard about the TPPA-11, which are suggesting to me that the left is falling along a spectrum of greater or lesser trust in Labour or not. I want to but I don’t. I know they’re between a rock and a hard place in that they can’t be open about details ahead of the negotiations next week. But I also agree with O’Connell Rapira that Labour don’t have to be doing this.

The election campaign rhetoric about neoliberalism having failed us was a statement from a centre left position that was going to disappoint many left wing people, but more of a problem for me is that a Labour-led neoliberal-lite govt would still be a move in the right direction but for this – every way we turn there is still the issue of trust with Labour. Taking a position of ‘trust us, we know what we are doing’ doesn’t work with the kind of history NZ has. At some point Labour will need to do the mahi of earning the trust of NZ again, and what’s happening at the moment is the painful, ‘let’s wait and we’ll eventually find out’ way.

The Spinoff piece ends with this,

This comment, deep in the select committee report on TPPA in 2016 did provide some relief though. Here’s what Labour said then:

“The TPPA will have ramifications for generations of New Zealanders. For their sake, we should not so lightly enter into an agreement which may exacerbate long-term challenges for our economy, workforce, and society.”

I would add that I’ve seen it reported once that Ardern has said if they have to, Labour will walk away from the agreement. That I’ve only seen this reported once amongst all the other messaging is what worries me.

Action Station are crowd-funding billboards to highlight the issues. Donations can be made here. 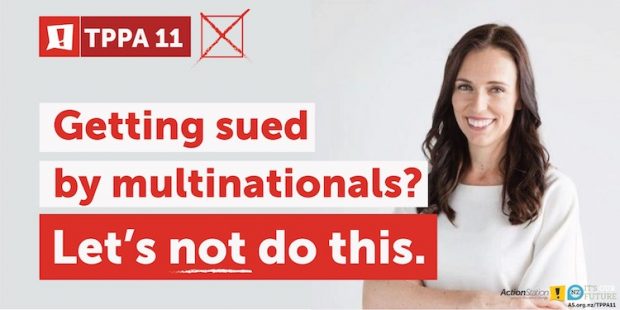 96 comments on “Trust, Labour and the TPPA ”