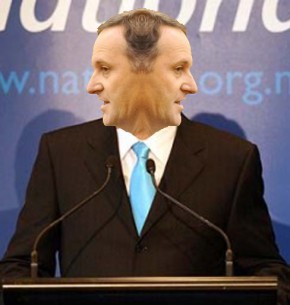 There’s no doubt that John Key is a very popular politician. One of the reasons is that he likes to tell the audience what they want to hear. Unfortunately this makes him all too happy to say different things to different audiences — John Key is a two faced politician. This has been obvious to some from the start. Here’s nzpundit quoting Victoria University political scientist, Jon Johansson in 2008:

“He has blurted for as long as he has been leader. He has said disparate things to different audiences not smart.”

Some of Key’s major duplicities and flip-flops are well known. His position on the Iraq war (and his subsequent evasions), climate change (he’s still playing both sides), Working for families (which used to be “communism by stealth”), his religion, a whole range of topics. Other examples have received less attention: his position on the future of families commission, development in Hobsonville, pylons in the Waikato, and so on.

It’s hard to blame Key for his two faced tactics. Sadly, they work very well. The opportunism and duplicity are seldom pointed out, the friendly and affable image is rewarded. That made it practically inevitable that he would go too far. As it seems that he has with the Declaration of the Rights of Indigenous Peoples.

Ever the pragmatist, John Key has (or rather thinks he has) sidestepped this difficulty by attaching a proviso reaffirming our “legal and constitutional frameworks” which “define the bounds of New Zealand’s engagement with the declaration”.

It’s an interesting position he adopts, seeking simultaneously to hold that the declaration is with and without significance, depending on which of his two coalition partners he wants to pacify at any given moment. But it is also untenable.

Untenable is the very least of it. This time the country can’t help but notice the duplicity. Key has set two large bodies of public opinion (represented for the sake of argument by ACT and the Maori Party) on a collision course. This time there are going to be consequences. The situation is potentially explosive.

To be clear – in my opinion NZ should indeed be supporting the Declaration. If it could have been done properly it would have been a positive and significant part of addressing our historical wrongs. “Properly” means a prior process of national discussion, consensus, and agreement on what the Declaration means for our country and how we can (and cannot) respond to it. Key, on the other hand, has committed NZ in the worst of all possible ways, in secret, in ignorance, and (in his usual style) duplicitously. Instead of a healing process, Key may have laid the foundation for further decades of racial tension. Not exactly a legacy to be proud of.