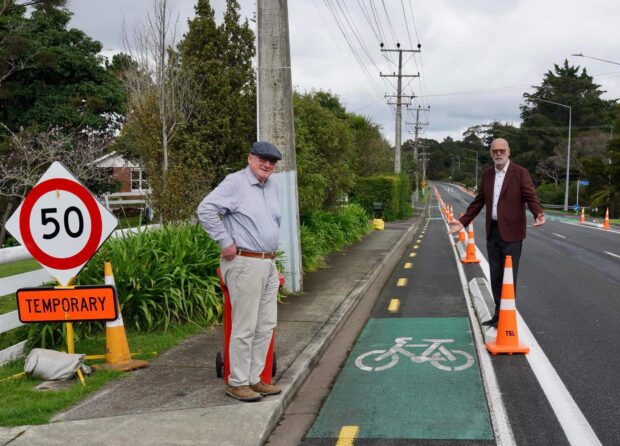 Wayne Brown (or is that Matthew Hooton) has over the past few days released a series of letters that are astonishing in their audacity.

It reminds me a bit of Donald Trump’s first couple of weeks where he released a series of executive orders that had, or were supposed to have, a major effect.  Things like withdrawing from the TPPA, restarting the Keystone Pipeline, or barring international NGOs that perform or promote abortions from receiving US government funding.

Unlike Trump, Wayne Brown has no executive power except in a few areas.  Nor does he have a supportive Council.  Instead he is trying to set the agenda and seeing how far centrists and even the left are prepared to move to his world vision by publishing a series of preemptive publicity strikes.

One of his advisors has links to Crosby Textor.  It shows.

His latest missive attacks Auckland Transport.  And there is a great deal of pro car anti bike rootin tootin in the letter, enough to fill a whole semester of stage one Political Science classes.

I seek a complete change in approach at AT. You appear to have been focussed on changing how Aucklanders live, using transport policy and services as a tool.  Instead, AT must seek to deeply understand how Aucklanders actually live now, how they want to live in the future, and deliver transport services that support those aspirations.

AT needs to exercise better judgement, as well as listen to and follow the wishes of local communities. That includes understanding that AT’s decisions impact the lives of people every day.  AT must understand the families who are struggling to move around the region: pick-up their children, do the groceries, get home safely after-dark, and juggle other commitments. You must understand the local businesses who rely on transport connections and their needs now and in the future. And you must recognise that the transport network materially impacts Aucklanders’ safety – especially at night, for women, for young people, the elderly and for shift workers.

To my mine this is fancy language for maintaining our car centric status quo.

Aucklanders do not always have the choice of using an e-bike, a bus or even a train but rely on the roading and carparking networks to make their life functional.

While this may be the case it ignores the fact that every time someone in Swanson catches a train rather than drive to the city someone in Te Atatu South has a slightly better trip to downtown.  Public transport will not be for everyone but an improved system can suit many of us.

Brown wants AT to support peoples aspirations for transport and how they want to live in the future.  He wants less road cones.  He wants fewer new roads, which is not such a bad idea, but also wants to retain car parking buildings and to Invest in cycle lanes only where the per-kilometre construction cost is on par with costs in other jurisdictions.  He also wants AT to “understand and address the social and economic disruption of road reorganisation, including the cost of eliminating of kerbside town centre parking and vehicle pickup /delivery points”.  No more cycleways is one possible interpretation.

His proposed cost discipline may in one respect not actually be such a bad thing.  I agree with Greater Auckland that some of the recent cycleway projects are over engineered and too costly.  We could do a great deal by completing the network by a series of more discrete projects.

But the problem is that Brown is essentially proposing to do not very much at a time when urgent action is required.  Two months ago Auckland Council endorsed the Transport Emissions Reductions Plan which requires Auckland City to reduce transport emissions by almost two thirds by 2030.  The briefing document noted that under current policy settings emissions would only reduce by 6% by that date.

The proposals to get there are radical including these:

This will require considerable reshaping of our city in a very short time.  Brown’s proposal at face value proposes little change.

How this is responded to by Councillors will be interesting.  I expect that this will be put to the test in the near future.