Were NACTs planning CGT themselves?

A week ago, Chicken Little Key said capital gains tax was going to “put a dagger through the heart of the economy”? Now, Key’s been replaced as point-man on the issue with Bill English and the line has been downgraded to “it’s a hodge-podge”. The dominant complaint from the Right, including English and Don Brash, is that Labour’s CGT isn’t comprehensive enough. Was NACT planning a full CGT including the family home?

That’s a pretty funny complaint when you think about it: ‘you’re addressing a problem but not going far enough, therefore, we oppose doing anything at all’. The Right has gone from saying CGT is a terrible idea to saying it’s a good idea but Labour is being too timid about it. If they really believe that – and I think that people like Don Brash, Bill English, and John Shewan do think that because they have been saying a full CGT would be good for over a decade – then why isn’t the Right going to this election campaigning for a more comprehensive CGT?

I think the reason that National’s lines are so screwed up is that they were planning to do just that. A CGT on everything including the family home to fund big income tax cuts was their second term plan.

National couldn’t really go into the election with no more of a plan than asset sales and, as we know, the Nats are a one-trick pony when it comes to populist policies: tax cuts. How could they afford more income tax cuts? Only by enormous social wage cuts , which wouldn’t be politically viable, or by raising that revenue somewhere else and the biggest hole in the tax system is the billions of capital gains income that is currently untaxed.

It can’t be a coincidence that the Productivity Commission that National established has just launched an inquiry into housing affordability, which is due to report a couple of months out from the election. That report, like every other one on housing for the past 45 years, will conclude a comprehensive capital gains tax would be best for the economy.

If National’s plan was to introduce a full CGT including the family home, they would have eventually raised the $4.5 billion figure that the Tax Working Group was talking about, and that would have allowed them to slash about 20% of the income tax take, including moving the top income tax rate into the low 20% range.

But, led by Captain Panic Pants and aided by the fact that John Key, exceptionally among righties, has never really liked CGT in any form (currency trading is captured by CGT), National decided that Labour’s CGT plan was a threat and they had to attack it from every angle they could make up. This led to the confused, contradictory lines from the Prime Minister, which are at odds with the lines from English, Brash, and the tax accountants.

Now, National’s back to square one: their only policy is asset sales, they can’t touch CGT themselves, and they’re facing an uphill battle to convince people that asset sales make sense and CGT isn’t fair. 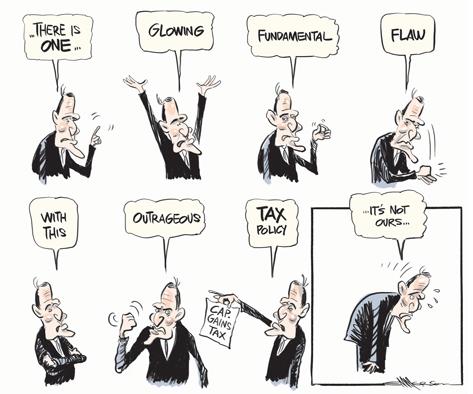 113 comments on “Were NACTs planning CGT themselves? ”