There’s a lot of empty, over-optimistic talk around at the moment about ‘green-shoots’ in the economy. Supposedly, these are little early signs of recovery which mean that soon everything will be back to normal and we can go back to getting rich selling each other houses with money we borrowed from the Japanese. Things will get better in time but this green-shoots mantra is more of the economic utopianism that got us into this mess in the first place.

The favourite ‘green-shoot’ is stabilisation of house prices. Unsurprisingly, the chief cheerleaders of the housing green-shoots theory are the banks and the newspapers that gleefully any industry report that claims house prices are stabilising. It’s in their financial interest to talk up the housing market as much as possible. The banks make money by lending it to you so you can buy a house, plus they stand to lose big-time if house prices drop too much and they’re left trying to make back their losses on mortgagee sale . The newspapers depend on advertising for their existence, principally (now that jobs and classifieds are online) house ads.

They’re forgetting the fundamentals. Usually, the growth in value of the housing stock tracks reasonably close to GDP growth over the medium-term, little booms, little dead patches. Then, over five years (2002-2007) the value of NZ’s housing stock grew (on paper) by 100%, while the economy grew just 34%. The graph shows just how huge that bubble was 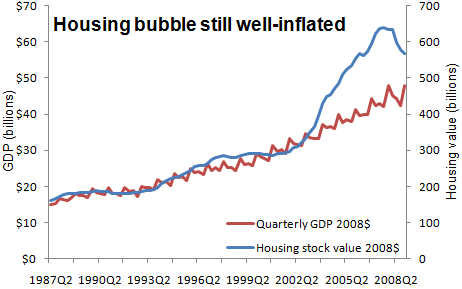 (I’ve gone back as far as the Stats data will let me, infoshare is cool btw)

The housing bubble has deflated at bit but there’s still a long way back down before we can say the over-valuation has unwound completely.

Effectively, the banks, the newspapers, and the other housing ‘green-shoots’ promoters are trying to re-inflate the bubble for their own short-term financial interests. But an economy cannot survive on bubblenomics forever. Eventually, reality prevails and what went up comes down again. We can’t avoid the fact that house prices still need to come down a long way, rapidly or slowly. Trying to forestall that will only makes things worse in the end.

Still, at least we’re not in the States – they went up higher, they’ve come down harder, and now government and the financiers are colluding to take huge risks with their economy’s future in an effort to breathe air back into the bubble. But that’s a topic for another post.
– Marty G