What is this regenerative agriculture thing anyway?

The Green Party released their Farm for the Future agriculture policy yesterday, and stands alongside Greenpeace’s ongoing Regenerative Farming Revolution campaign. Given the state of New Zealand land and water, changing how we do farming should be a strong political topic for the left this year. We need to get past the left’s position of blaming farmers for land and water pollution (as if we don’t eat farmed food), and instead build a strong political movement for changing how farming is done, that educates the largely urban public and supports farmers to do the right thing.

Sometimes people say they don’t get what regenag is, so this is a post where I lay out some of the ground for understanding it.  I’m not a farmer, but I garden and have long been in subcultures in NZ were regenag is the norm.

Regenerative agriculture is based on the idea that nature is a powerhouse of sustainability and resiliency. It uses nature mimicry to establish productive systems that are self sustaining, require little external inputs, and that focus on ecological cycles like those that build soil rather than mechanistic systems that artificially force growth and produce large amounts of pollution. Building and maintaining soil biological health is central, because it’s the key to systems that regenerate rather than degrade.

At a basic level this means two things.

In regenag terms, it’s not sufficient to do less damage than the farm down the road. Cleaning up a toxic dump, planting riparian strips, reducing nitrate load are all good things to do, and heading in the right direction. They may even be regenerative in the specific site but the whole system itself isn’t necessarily actively regenerative.

Soil restoration is a core component. Regenag has soil as a central focus because it recognises that the natural, stable ecosystems that sustain themselves over time are utterly dependent on the soil food web.

Conventional ag practices such as ploughing, pesticide use, artificial fertiliser, burnoffs, reducing biodiversity, and overgrazing tend to degrade soil over time, the system can’t sustaining itself indefinitely, needs more outside inputs and eventually fails. It should be mentioned that many conventional farmers mitigate this, and are trying to move in a better direction (hence the need for political support for regenag). Previously pastoral farming was degrading the soil/fertility relatively slowly, but industrial dairying for instance is doing it on steroids.

Biomimicry. Mimicking natural systems as much as possible because those systems are inherently sustainable, regenerative, stable and efficient. Forests don’t need to import fertiliser nor dump waste, because they are made up of natural systems that cycle most nutrients and wastes in closed loops, and are part of larger systems that the forest sits within that cycle nutrients and waste from and to the outside.

Systems thinking rather than linear thinking. It’s about the relationships between everything, and the nature of those. Counting things matters too but is secondary to understanding how things relate. This is both a conceptual skill and in ag terms is largely, at this time, contained within certain philosophical approaches to farming (eg organics, permaculture, biodynamics, food forestry). Here’s an example from food forestry. 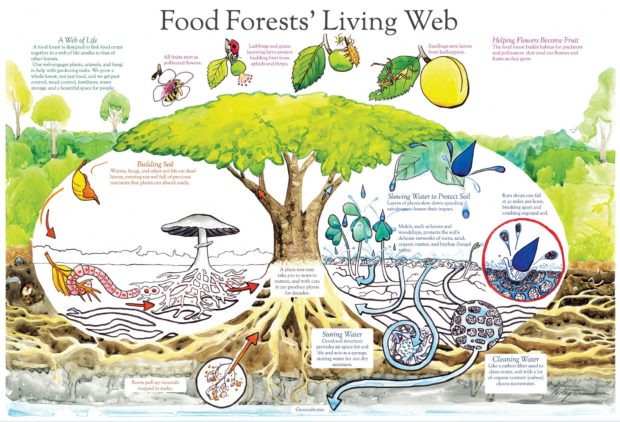 If you want to look at examples of vibrant and successful regenerative farming operations, including in New Zealand, check out these past regenag posts,

Mod note: If you want to discuss the Greens’ new Farm for the Future policy, please read it first. Greenpeace’s response to the policy is useful too.

32 comments on “What is this regenerative agriculture thing anyway? ”