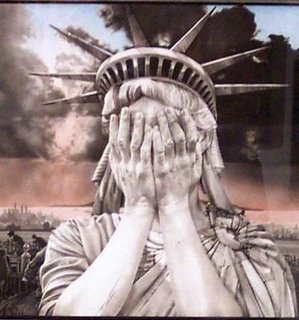 With the Presidential elections now in full and definitive swing, and a US naval ship likely to visit, we need also to get our own answer for a big question: in this century, what is America’s role in the world?

The United States is still the single most influential actor on the world stage. It’s got 5% of humanity but about 20% of gross world product, and is the only country with global military capabilities. It’s command of the current digital economic transformation is almost total.

Some say that’s pretty much all good. As Samuel P. Huntingdon put it more than 20 years ago, U.S. primacy is “central to the future of freedom, democracies, open economies, and international order in the world.” Others including previous Foreign Secretaries Madeline Albright and Hilary Clinton are at least as bullish.

The impulse of utopian idealism for the United States can also be found on the left. Michael Moore’s film Where To Invade Next gives a good tweak to the United States’ propensity for launching unsuccessful invasions for natural resources. He points out that the United States would be able to live up to its utopian stated ideals if it learned lessons from European countries. With good lessons learned, implies Moore, America will once again fulfil its global promise.

Centrist supporters of this utopian view of the United States often cite the United States-led defeat of global fascism in the 1940s, post-war expansion of democracies, formation of the United Nations, expansion of global human rights, the formation of major economic institutions (the World Bank, the IMF, the WTO, etc) producing six decades of steady economic growth, and defeating almost all communist governments including the Soviet bloc.

There’s some truth in there, and quite a bit of hyperbole. You can do your own ledger of peace after Korea, Vietnam, Indonesia, middle and South America, etc etc.

After all, U.S. aid to the muhajadeen may have helped bring down the Soviet Union, but it also helped wreck Afghanistan and give birth to the Taliban and al Qaeda. More recently, U.S. “leadership” has produced failed states in Iraq, Libya, Yemen, and Somalia. It’s efforts at over-reach are often tragic, including its rhetoric-only support for the Arab Spring. As agents for peace, the United States has a decidedly mixed record.

But blaming all the world’s ills on the United States is not merely factually wrong; it lets the real perpetrators off the hook. The United States did not launch the uprisings against Muammar al-Qaddafi or Bashar al-Assad, did not start the civil war in Yemen, and cannot be blamed for the Sunni-Shiite divide now plaguing the Middle East. The Turkish, Polish, and Hungarian governments aren’t drifting towards authoritarianism today because Washington encouraged them. The U.S. is not encouraging Britain to exit the European Union and break the Euro, and Israel and Saudi Arabia will just continue to do what they want no matter what diplomatic or military signals the US sends them.

Instead of seeing the United States as all-powerful and either completely good or evil, it makes more sense to see it pretty much like most great powers in history. It has done some good things, mostly out of self-interest, but occasionally for the benefit of others as well.

I’m not confident that either the hard left or the United States military establishment is willing to take such a balanced view. But its next elected government must.

If, as Hilary Clinton states often enough, she wants to build on the achievements of President Obama, she should alter the focus of its government’s foreign policy towards one that addresses the anxiety about global prosperity, rather than an over-emphasis on military solutions upon the next unruly dictator. That is what the United States has done well for the world since World War Two.

The historical moment that the next President of the United States will step into is not primarily military, but economic. Many commenters on this site have noted the economic stasis and decline befalling the developed world. Since 2008 the global growth rates have been so poor, its recovery so globally uneven, that it has produced a sustained crisis in the virtues of democratically representative government itself. There’s an anxiety that the engine of prosperity in most developed nations has ground to a halt. And if that’s true, it’s harder to trust our elected leaders that they will follow the social, political and economic bargains that we’ve come to rely upon.

That developed-world quagmire makes people reach for extremes to see if there are solutions to get their countries out of moribund stasis. They reach for extremes called Trump, or Le Pen, or Sanders, or withdraw like Britain seems ready to do from the international community altogether. Australasia seems to be one of the final beacons of secular democratic equanimity. What role does an institutionalist centrist foreign policy hawk have in the world?

To repeat a Clintonian line back at her, “It’s the economy, stupid”. The next presidential leader of the United States should continue Obama’s work of growth and wealth socialization at the expense of military expansion. But with its economic power growing, its centralization of global wealth increasing, it should do it for the world.

HRC will be keenly aware that there is little enthusiasm in the U.S. for more interventionism. But the role an institutionalist centrist foreign policy hawk should have in the world is one that seeks to strengthen global civil institutions so that they can replace military intervention into the last choice, not the first. Put more effort into reforming the U.N., the I.M.F., the W.T.O, and of course global agreements such as Paris 21. And build fresh instutitions. Put more effort in to the dividends of peace.

A President HRC should not resile from defeating terrorism including by military means – and nor will it ever – but it should bend the unending security state to the effort of global economic stability, not military stability. That would be a legacy and role for the U.S. as useful for the world as Obama’s has been in domestic policy.