This is my take on parts of the YouTube video “Kevin Anderson – Delivering on 2 deg C: evolution or revolution.”

According to wikipedia, Professor Kevin Anderson is:

The guts of the message I got from Professor Anderson’s presentation was that the Climate Change scientific/expert community is “flavouring its work”, watering it down in order to fit in with what is “politically palatable” and convenient to those in power, and ignoring the resulting “fraudulent” character of the entire endeavour.

Prof Anderson comments that the CC expert community massages it’s assumptions so that the results it generates sits within a set of positive and “politically palatable outcomes” that cannot be questioned.

This comment applies to the work known as Integrated Assessment Models. These are the principle tool used to inform and guide governments and bureaucrats globally on required climate change policy.

The basic science that is being done is very solid. However the CC scientific and expert community as a whole has been guilty of consistently underplaying what that science is implying that we need to change in society urgently.

Some specifics that I got out of the presentation:

Prof Anderson also relayed a bunch of quotes during the video of some senior political players that he has talked to personally:

“Too much is invested in 2 deg C for us to say it’s not possible – it would undermine all that’s been achieved. It’ll give a sense of hopelessness – we may as well give in.”

Prof Anderson: “Are you suggesting that we have to lie about our research findings?”

“…well, perhaps just not be so honest – more dishonest…”

“We can’t tell them (Ministers and politicians) it’s (2 deg C) impossible. We can say it’s a stretch and ambitious – but that, with political will, 2 deg C is still a feasible target.” [This particular person did not believe that the target was at all possible.]

“Our position is challenging enough, I can’t go with the message that 2 deg C is impossible – it’s what we’ve all worked towards.”

The upshot of all this is that our governments and our policy makers are getting the news from the climate change expert community that they want. Not the facts that they need.

This is a massive programme of pretend and extend, nothing more.

Personally, I am picking that we will hit 2+ deg C warming soon after 2030 (and that it is already a done deal; we are at about 1.1 deg C warming and rising now) and that we are right on track for circa 6 deg C warming by 2100, which will be fatal to civilisation as we know it.

In theory, today’s infants and preschoolers will live long enough to see this terrifying world that we have handed on to them. 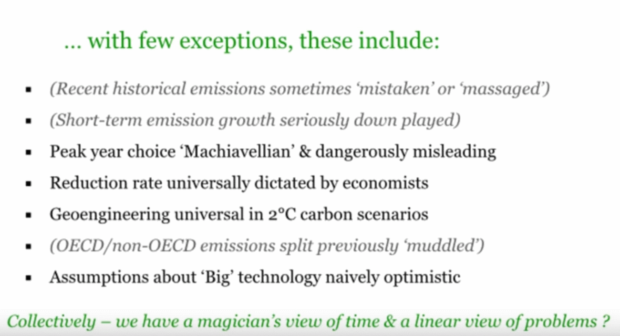