Why do they hate us?

“Since the beginning of 2015, the Middle East, Africa and Asia have seen nearly 50 times more deaths from terrorism than Europe and the Americas” so reports the Washington Post.

The death tolls of attacks in Western countries pale in comparison to daily attacks in other parts of the world. In a few frenzied days in late June and early July, three Islamic-State-linked attacks killed over 350 people. On June 28, three attackers detonated their suicide vests at Istanbul’s Ataturk Airport and killed 45 people. On July 1, Bangladesh suffered its worst terrorist attack in history when gunmen killed 20 hostages at a Dhaka restaurant. On July 3, nearly 300 died in a busy Baghdad shopping district.

Muslims and coloured people in poorer countries are by far the victims of terrorism, even though the media focus is on casualties amongst wealthier, whiter peoples. The WaPo infographic says it all (the little yellow bars facing upwards are the fatalities that Europe and the Americas have been hit with; the big bars facing downwards, the rest of the world): 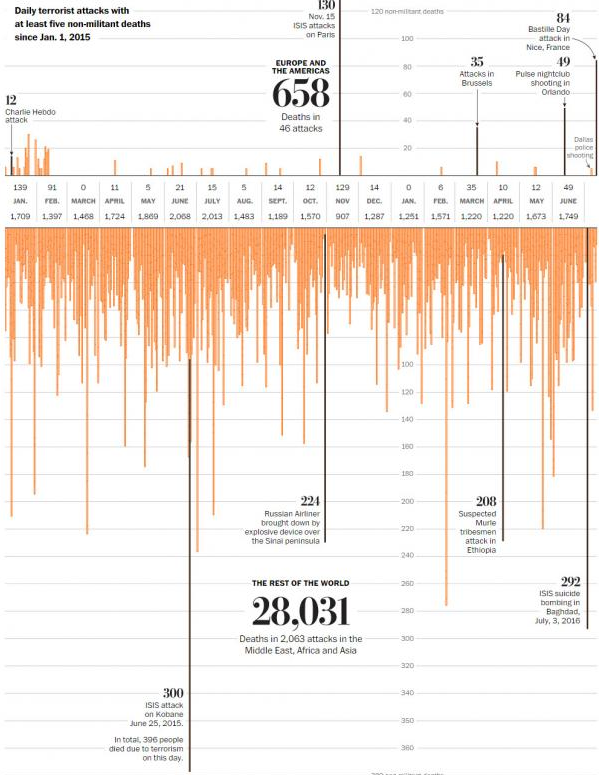 The article goes further and says “Outside large attacks in France and Belgium, attacks in eastern Ukraine account for most terrorism casualties in Europe, according to Jane’s Terrorism and Insurgency Center. ”

It’s worth noting that attacks on civilian centres in the eastern (Donbass) region of Ukraine have been by anti-rebel Kiev Government forces including openly neo-Nazi military units and possible airstrikes by the Ukrainian airforce on apartment buildings. (The rebels in Eastern Ukraine do not have access to an airforce).

Also worth noting that: the very many civilians killed by US drone strikes in Afghanistan, Pakistan and other countries have NOT been included in these figures. To the local villagers, townsfolk and even wedding parties affected by these indescriminate western military strikes without warning and out of the blue, it’s nothing less than terrorism.