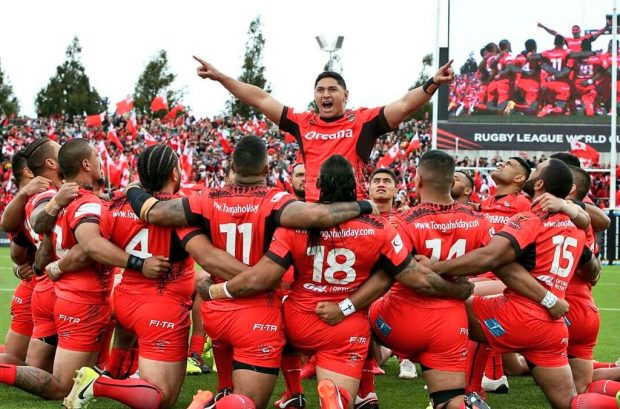 If you wanted to see a clear example of sport and class then the last weekend provided the perfect example.

On one side was the Tongan Rugby League team whose ranks included talented professionals who chose to give up well paid gigs and potential big pay outs in the top two International teams so they could play for their home country, a beautiful Pacific paradise of not very many people who at the beginning of the competition had no chance of advancing.

Then they beat New Zealand. And they came so, so close to beating England, a professional league superpower with 570 times as many people as Tonga.

And you have to question the refereeing. That final play looked like it could have been a one on one strip and the consequence would have been a Tongan win and a place in the final.  It should at least have gone to the third ref for review.

And as I said before it is great to see the formerly termed minnows playing so well. It is also great seeing professional players turning their backs on huge game payments so they can represent the country of their birth or ethnic origin. Andrew Fifita for instance who was selected for Australia and could have earned $20,000 per test match and a winning bonus of $50,000 opted instead to play for Tonga and earn $500 per match.  Onya Andrew.

On the other side is the America’s Cup.  High tech boats with lots of sponsors’ logos.  Huge TV contracts to sign.

Over the past couple of weeks we have had a crisis develop in Auckland about the size of the public spend.  It feels really similar to what happened in Wellington with the Hobbit.  A large multinational corporation has local public organisations on to see how much it can squeeze out of them.

First it was the size and cost of the headquarters.  $190 million and significant encroachment on the Waitemata Harbour was proposed.  Thankfully Auckland Council pushed back.  But it will cost $140 million.

But now there is a further claim for $80 million.

Team New Zealand’s demand for a ‘hosting fee’ has the potential to take the America’s Cup away from Auckland in 2021.

Asked about the negotiation process Parker said: “I think we’ve been making significant progress in the last couple of weeks. If any one of the parties become unreasonable then we could lose it.”

On one side we have a talented league team willing to play for peanuts and which has invigorated the city in a way that I have not seen. I toot at every vehicle I see with Tongan flags and I toot all the time. I have not seen the city so proud.

And on the other side we have a bunch of rich sailors who are completely mercenary and will represent anyone as long as they pay enough. They ambush the city and the Government and demand that much money the city could do a great deal with addressing the scourge of Kauri Dieback for instance. And then after the decision is made they demand more money. And the justification is that somehow there will be huge wealth generated from visiting members of the 1%.

If there is huge wealth to be generated then I think the recipients of this wealth should pay the hosting fee. I am sure there will be a solid business case somewhere presuming the predictions are accurate.

I would prefer that we sponsor the Tongan National League team and tell Team New Zealand they can no longer use the name if they go overseas.  Passion and dedication and not money should be the primary driver of international sport.