Will JT be a Labour MP? 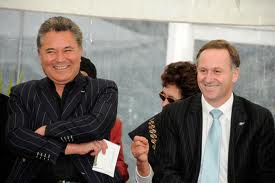 It has been a strange week.

I have found myself in complete agreement with people who I do not normally agree with. I found myself in the unusual position of supporting Matthew Hooton on his stance on Chorus and I then cheered him on as he got himself kicked off JT and Willie Jackson’s Radiolive show.

And yesterday I found myself agreeing completely with Fran O’Sullivan’s column in the Herald where she called their behaviour for what it is.

She also nails it when she says that “[i]t is to Labour’s credit that the party is trying to even the score when it comes to evening up gender representation in Parliament.”  Because when you strip away the slogans that have been thrown at the proposal it is all about equality and fairness.

Meanwhile on the blogs the debate about Tamihere has raged.

And Josie Pagani came to blows with Danyl McLaughlan claiming that he said she supported what Tamihere had said.  She clearly is not, but I do not read Danyl’s post as claiming that she is. Pagani is defending Tamihere’s right to free speech.  It may be that she no longer thinks that he should be an MP and she is now restricting herself to say that his freedom to say what he wants, no matter how appalling, should be preserved.

Danyl’s description may have been scathing but he obviously feels strongly about the issue.  His essential proposition is that supporters of Tamihere’s inclusion in Labour’s caucus could have landed the party with an MP whose views are totally contrary to the party’s core beliefs.  Identity politics are whether they like it or not an important consideration for the Labour Party as is fitness for the job and basic human decency.

If Pagani now believes that Tamihere should not become a Labour MP then I agree with her.  I blogged last November that I did not think that he should be accepted as a member and the reasons are just as valid in determining if he should be selected as a Labour candidate for a Parliamentary seat.  The reasons included:

The progressive nature of Waitakere Man should be appealed to by Labour in its quest for electoral success.  But the party should draw the line against misogyny and those who denigrate women.  We should not seek to improve support by sanctioning in any way opinions that are plainly wrong.

[For the avoidance of doubt these views are entirely my own and not sanctioned by the higher echelons of the party or anyone else for that matter.]