Eorkmployment confidence has plunged to its lowest level in 2 years, according to the latest Westpac survey. A bosses’ shill says workers are wrong to be worried about their jobs. Unfortunately, the bosses have been promising us that everything’s going to be OK for four years now, and workers have a good track record on picking the state of the job market.

It’s not the level of the confidence index but the change in that level that matches well with changes in employment levels a quarter later (0.42 correlation for you geeks) 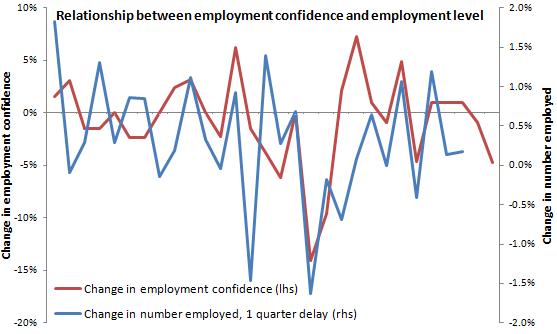 If the pattern holds, there is likely to have been little or no job growth in the December quarter and possibly a small decrease in March. Given the economy needs to create 120 jobs per weekday to keep up with population growth, no wonder workers are feeling less certain about being able to get and keep a job.