Donations over $30,000 from the same source must be declared to the Electoral Commission within 10 working days. National overstepped the mark in declaring a total donation of $86,005 from Gallagher Industries outside the limit. These days  the Electoral Commission doesn’t get involved – the penalty is a fine of up to $40,000 on summary conviction.

ImperatorFish: Spears Into The Sea

We need better answers than just “stricter enforcement” to solve the copyright debate – we need some fresh ideas.

Is it just me…

…or is National’s “Ethnic Team” so tokinist it’s kinda racist in it’s own right?

Oh wait, there is.

The same day as we learn that Labour won’t be allowing press gallery journos free access to their wing of Parliament as previously (apparently a desperate attempt at message control by keeping off message MPs and journos apart: someone better tell Fran Mold what a cellphone is), Labour’s bizarre cult of David Farrar has performed its first human sacrifice.

ImperatorFish: Sonny Bill Has No Plans To Sleep With You

The stock market dipped sharply in trading today, after no stories appeared in any of the major newspapers about Sonny Bill Williams for almost two hours.

News in on the Herald says the Maori party are talking the talk over National’s latest insult to Maori.

Will they quit the Government?  Or will the smell of those limo seats  mean another backdown in a couple of weeks?

We’ve been told about how bad poverty is here, and how bad it is for our future by the excellent Inside New Zealand documentary – but will it take an outside view to wake us from our slumber?

If so then Christians Against Poverty‘s John Kirkby is willing to provide it for us.

Worth a thousand words: minister of tourism 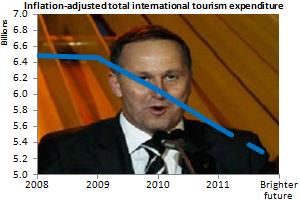 Kiwis want to keep our land, will Key listen?

I/S at NoRightTurn says we should hold Key to his latest pathetic excuse making for his inaction on the sale of our farmland overseas: “John Key’s excuse for the Crafar farms sale? His hands were tied. But he’s promising to change the law if we make enough noise about it” Unfortunately, Key doesn’t mean it. He has no intention of listening.

Most Kiwis have had no payrise, if they’re lucky enough to have kept their jobs, in the past few years. Yet Christchurch City Council CEO Tony Marryatt has kept on getting pay rises on his obscene salary, even as his job performance has declined. Now the arrogant bastard is saying he’ll keep $34,000 he doesn’t deserve unless the elected council ‘behaves’. There is no justification for this madness. Sack him.

You’ve got to be kidding me

Pike River boss Peter Whittall, the guy facing charges after 29 of his employees died working in his unsafe, ‘profit-over-people’ mine, has set up a mining safety consulting company. What’s next? A Minister of Tourism who always holidays overseas? A Finance Minister who wants to sell highly profitable assets in a down market? … oh … This country is nuts.

It’s not racist to want self-determination

Danyl at Dimpost says it all succinctly on Crafar Farms: while China is a rising economic super-power and a close trade partner of New Zealand, it’s also a totalitarian military dictatorship. People are allowed to feel apprehensive about such a state building its own vertical supply chains within the New Zealand economy without being labeled xenophobic and racist.

Fran O’Sullivan is an enemy of the people. Her article in this morning’s Herald will forever brand her as a traitor to this country. She will be shunned and reviled by people who understand what a disgusting sell-out she has become. There is no coming back from this. The Crafar decision is a victory for […]

Ports of Auckland and casualisation

CTU President Helen Kelly talks about the Ports of Auckland and the effects of casualisation on workers and workplace health and safety.

Income inequality is one of the major issues of our time, and is being discussed globally. But our government doesn’t appear to be listening. Now a new organisation is aiming to raise awareness of the issue, and pressure our politicians to do something about it.

David Farrar is calling for the Christchurch City Council to be sacked on the bizarre pretext that some of them have objected to the council CEO’s obscene pay rise. Apparently it’s a crime not to express confidence in your CEO if you’re an elected representative (Farrar seems to have missed the Collins-Matthews affair). But this is all a softening up exercise.

Being tenants in our own land now OK by Key

When he was running for re-election, John Key said he opposed selling the Crafar farms offshore: “I am concerned about the risk that New Zealanders become tenants in their own land”. Now he has won what is very likely his last term, he doesn’t give a damn about the farms going into foreign ownership and our publicly-owned farming company literally becoming the tenant of the land.

WTF is a “primary” anyway?

Even we political junkies have a hard time figuring out what the heck’s going on in American politics sometimes.

And it’s not like our media are any help.

Queen of Thorns takes a look…

The limits of resilience

Christchurch has been back in the news recently for all the wrong reasons. What’s going on behind the public narrative of a tough and resilient populace soldiering on in the face of all these obstacles?

ImperatorFish: Nats Must Act Urgently To Save Us From The Sun

The biggest solar storm for six years is headed our way. What is John Key going to do about it?