What would you guys think about us taking on advertising?

A few months ago, I saw Public Address’s advertising rates card and it turns out there’s a fair, but not by any means huge, amount of money in advertising for a blog of our size. Now, we wouldn’t want that money for its own sake – we didn’t start this to make money and, frankly, the amount we’re talking about would barely cover Irish’s whiskey bill. But, we’ve been thinking that there are useful things we could do with a bit of cash. For starters, we could take the burden of funding the server, which has gone from $10 a month to about $170, off Lynn. We could chuck the rest in a fund for leftwing projects – provide some money or materials for a protest here, print off some flyers there, maybe a third party campaign next election, that kind of thing.

Now, we are really concious that we, the writers, are only half the reason this blog has worked. The other half is you, dear reader (and, especially, you commentators). This forum as much yours as it is ours. So, we wouldn’t want to go and do this without talking to youse about it first.

I know some people object to ads and will not like us taking them on principle, and I understand that position. But I think of the useful things we could do with that money and, to me, that is the clincher. I wouldn’t object to the Greens or Labour having a billboard on their buildings either, because the money is going to a good cause.

Anyway, let us know what you think. And if you’ve any other ideas for a brighter future for The Standard in 2009, let us know. 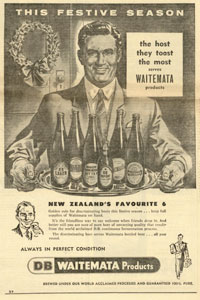 [Someone asked in comments whether the original version of The Standard ran ads. The answer is ‘yes’. Click for a larger version. Ah the good old days. a_y_b]