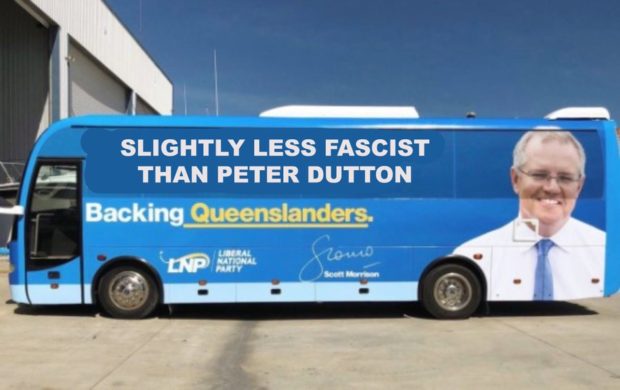 Some international news yesterday as Jacinda Ardern chose to use decidedly undiplomatic speech to address Australia’s removal of its citizenship from a Jihadi bride leaving her as New Zealand’s problem, even though her link to New Zealand was tenuous and she was for all intents and purposes Australia’s problem.  And even though Ardern had previously asked Scomo to be careful with the issue.

Prime Minister Jacinda Ardern has lashed out at Australia for dumping responsibility for a woman and two young children detained at the Turkish border on New Zealand.

The 26-year-old detainee – described by the Turkish government as an Islamic State terrorist – was caught trying to enter Turkey illegally from Syria.

Ardern said the woman, who had dual citizenship, left for Australia when she was six and travelled to Syria from Australia on an Australian passport.

Ardern said she directly raised the matter with the Australian Prime Minister Scott Morrison and asked that they work together to resolve the issue.

“I was then informed in the following year that Australia had unilaterally revoked the citizenship of the individual involved. You can imagine my response.

“Since then we have continually raised with Australia our view that their decision was wrong, we continue to raise that view.

“My concern however, now, is that we have a situation where someone is now detained with two small children,” she said.

Legally the woman’s citizenship now only lies with New Zealand.

“I never believed that the right response was to simply have a race to revoke people’s citizenship, that is just not the right thing to do.”

We will put our hands up when we need to own the situation. We expected the same of Australia, they did not act in good faith.”

“If the shoe was on the other foot we would take responsibility, that would be the right thing to do, and I ask of Australia that they do the same,” she said.

She said New Zealand officials would be working to do welfare checks of those involved, and would be engaging with Turkish authorities.

“Regardless of their circumstances, regardless of whether have committed offences and particularly we have obligations when they have children involved.

“I would argue Australia holds those obligations too.”

There are some pretty fundamental human rights at stake.  Just check the United Nations Declaration of Human Rights if you need proof.  Protected rights include this one:

Everyone has the right to leave any country, including his own, and to return to his country.”

Everyone has the right to a nationality …

Of course Australia has not been the best at recognizing international human rights and respecting the rights of an individual.  Just read any of the Standard posts about Peter Dutton to realize this is another example of weaponised brutality for political advantage.

And Australia’s immigration policies and practiced cruelty has caused problems for the relationship with New Zealand in the past.  It was just 12 months ago when Ardern told Morrison that Australia should not deport to New Zealand its people and its problems.

A couple of years ago Andrew Little also stood up to them.  This is what I wrote at the time:

The policy relates to a 2014 law change which increased the Minister of Immigration’s powers to cancel the visas of Kiwis, including those who have lived in Australia for extended periods of time who are deemed to be not of “good character”.

The cases are numerous but include a 17 year old held in an adult detention centre for non violent offending in breach of International Treaties protecting young people, as well as the case of Ko Hapua and Lee Tepuia, both who were deported because they belonged to motorcycle gangs that were not actually illegal.

When you also consider the appalling treatment that refugees have been subject to in Nauru you get an overwhelming feeling that people are being harassed and humiliated by Dutton and Co for political gain.

And there was this earlier attempt to implement the power to remove an Australian’s citizenship even if it was the only citizenship that they had.  I wrote this in 2016:

In Tony Abbott’s Australia there was a recent attempt to attack a fundamental human right, that of citizenship by granting the Minister of Immigration the right to withdraw an individual’s Australian citizenship, even if it was the only citizenship the individual had.

It was a covert attempt from within Abbott’s cabinet and was quickly shut down by others with a proper comprehension of the importance of citizenship and human rights.

It was not a general power, it was to be applied only against those suspected of terrorism related offences.  But the fact that it was even considered, and the leaking of transcripts of what was said in Cabinet, suggests that Abbott’s tenure as Prime Minister may again be on the ropes.

The proposal was raised by Immigration Minister, Peter Dutton.  Remarkably there was no policy paper to present and senior members of Cabinet including the Deputy Prime Minister were not aware that the idea was being proposed before it occurred.  It was brought up at the end of a cabinet meeting with no paperwork.

The Sydney Morning Herald ran this story which included these remarkable quotes from within the cabinet meeting in question:

This is an extraordinary proposition … [a] person’s citizenship is of enormous importance, intrinsic to themselves. Take me. The only people who’ve lived in Australia longer than my family are Aboriginal. I have no other identity. Are we seriously saying some minister could take my citizenship?

You know that things are particularly freaking weird when Barnaby Joyce opposes something ultra conservative.  But that is what happened in this case.

National is backing Australia’s view.  I am pretty sure that if Judith Collins was in control the Jihadi’s bride’s kiwi citizenship would be taken off her.  The consequences to her two young children are irrelevant.

We should not be surprised.  Australia’s handling of the rights of kiwis who have spent the vast majority of their lives in Australia and who have been treated with contempt has caused significant damage to the Aotearoa Australia relationship.  This particular incident is the cherry on the top.