So, Farrar condescends that – “It is well known you can not distribute pre-filled in or pretend ballot papers. We’ve had this law for decades.” – then promptly demonstrates his ignorance of that law by accusing Labour of breaking it when they aren’t. It only applies within 3 days of polling. Ooops. After being repeatedly called on it (I liked the take at Imperator Fish) he eventually added “NOT” to the title of the post. (He has subsequently also changed the text of “UPDATE2”.)

As one of the comments observes:

Clearly he’s too busy doing important stuff like, tweeting, to notice this.

Yup, sorry Kiwibloggers, it’s true, Farrar is busy playing with his cool new friends on Twitter instead of you. He shares jokes about you too behind your backs… 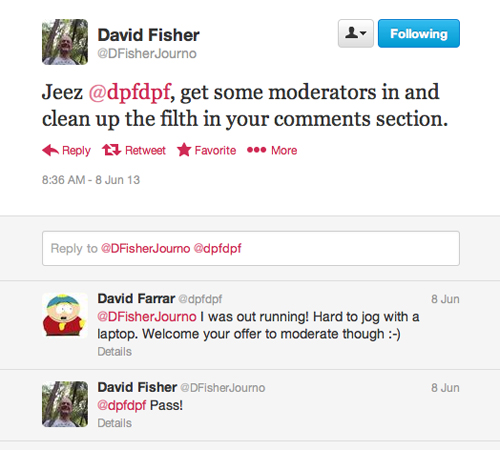 Serious point though – comment moderation at Kiwiblog is definitely needed.