This shit keeps getting real.

A few weeks ago Dave Kennedy reported on his 25 year old Southland 1/4 acre garden where the trees are dry stressed and on the verge of dying (Local Bodies: Climate Change Just Got Personal),

Invercargill usually expects around 1,150 mm of rain over a year, but in 2017 we received around 750mm, less than two thirds of a normal total. Last October Invercargill sweltered with a record breaking 25 degrees and since then we have been averaging in the 20s. Over the past week temperatures have pushed the mercury in our gauges to over 32 degrees, the hottest ever recorded for almost 100 years of data. The average high over the Summer months is normally only 18 degrees and anything over 20 degrees is celebrated. We are currently celebrating the occasional day under 20.

At 46 degrees latitude south, New Zealand’s southern most city has regularly been experiencing similar temperatures to cities near the equator. When we were sizzling at 32 degrees, we equaled Cairns, were 2 degrees warmer than Jakarta and Suva and 6 above Nairobi. These cities are used to such temperatures and their ecosystems have adapted to it, it has been a severe shock to ours.

Southland is a wetland (or was until settlers drain it). Here’s a picture of the lower catchment of the Oreti River (read on for the additional significance of this), Dave goes on to write about the impact on his quarter acre garden and putting that in the context of climate change and who’s responsible. It’s worth a read.

As of Sunday just past, people in Invercargill and Bluff are no longer allowed to water their gardens,

Water restrictions in Invercargill will tighten further on Sunday, with a total ban on outside water use.

This ban includes hand-held hose, watering cans and buckets, which were allowed under the previous restrictions.
…

The council was required to impose water restrictions by the conditions of their permit to use the Oreti River.

Initial water restrictions were imposed on Tuesday when the flow of the river dropped to 4 cubic meters per second.

The new water restrictions are triggered by the flow dropping to 3.2 meters per second, which was “inevitable” by Sunday, Murray said.

The restrictions were likely to remain in place for “most of the summer, if not the complete summer” he said.

The Invercargill City Council says it will be enforcing the restrictions. The council is asking residents to report any breaches of the new restrictions, and their website says a fine of up to $20,000 can be imposed (although it doesn’t say under what conditions). Contrary to statements in the media the ICC’s website (PDF) says that people can use grey water from their house to water their garden.

I’m hoping that the council will use discretion when it comes to enforcement e.g. for people that are disabled or elderly and can’t manage buckets of grey water, as well as low income people who are reliant on their home gardens for food.

ICC are saying they are mandated to do this because of consent on their water take from the Oreti River. But in the meantime businesses are still allowed to do things like wash cars, and there appear to be no instructions to reduce household use e.g. shower every second day instead of every day (although some people will be using showers to keep cool).

There is something deeply wrong with allowing businesses to wash cars when making it illegal for people to water their vege gardens and trees. In the age of climate change, trees in particular should be a priority, but so should local food. This is about preserving resiliency. The priorities here point to our regulations being written for a different age.

Personally, I’d risk the threat of a fine and court action if it meant saving food trees that I can’t replace. As food forester Robert Guyton pointed out about the Southland drought,

I imagine much of the harm is lagging and will appear later, even when conditions improve. Young trees starved of water may never become robust enough for a long life. I think we can’t see the extent of the harm. I wonder about the delicate organisms that have no buffer and for whom there is no turning back; mountain butterflies, rockpool shrimps, etc.

The ICC are warning that the situation is likely to get worse, and if it does then businesses that rely on large water use may have to close (see PDF link above).

Meanwhile, up country in that other bastion of high rainfall, a drought was declared in parts of the West Coast this month, 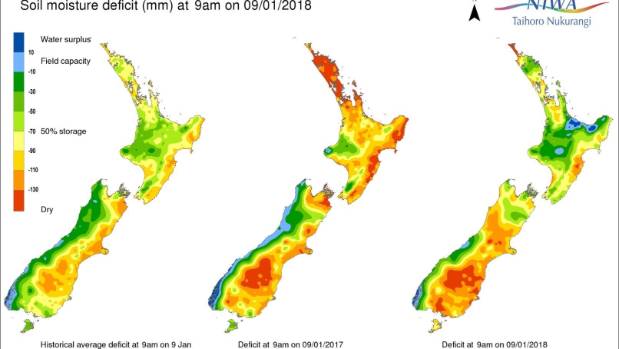 Niwa’s soil moisture deficit charts compare the historical average, Jan 2017, and Jan 2018 (also a good graphic of what is happening in Southland).

Prolonged dry conditions have prompted the Government to declare a drought in two districts of the South Island’s West Coast.

An “extremely wet winter” left many farmers unable to grow pasture or crops for spring. The early and unusual dry start to summer “turned West Coast pastures from swamp to concrete”, he said. “We are keeping a watching brief on neighbouring areas.”

It is the second time the Buller and Grey districts have been declared as being in drought – the first was in April 2013.

They’ve since had some rain on that part of the Coast, and I’m guessing things aren’t as bad as they were. The thing that interests me as well as the West Coast having drought, is the change in conditions from spring to summer and the impact on the land. This is the stuff we should be preparing for, and we’re not. We’re still largely assuming that things are going to be ok, or that it’s someone else’s problem to deal with.

At this point I’d like to pre-empt arguments that no single event can be blamed on climate change. I. don’t. care.

I find it ludicrous to even go down that track now, because everything we experience happens in the context of climate change. It’s not something for the future, it’s what is happening now. So the drought on the West Coast, or the 40C temperatures forecasted for parts of NZ this week, or the disabled woman who died in Christchurch this week from hyperthermia… if you think it’s relevant to argue over whether climate changed caused those or not, instead of accepting that climate change is a significant contributing factor and moving on to what are we going to do about it, then I’m saying fuck that reductionist shit*. Are we really going to wait until we have multiple deaths every summer (and winter) before we do something? Or wait until NZ starts getting crop failures? How many people have really taken on board that by the time we get to that point, it will be too late?

(*it’s also the same disconnected bullshit that let NZ argue for a decade about how to measure poverty instead of doing something about it).

It’s worth keeping an eye on Cape Town, which is on the cusp of becoming the first major city in the world to run out of water. People are being warned to “save water as if your life depends on it” in order to prevent the town water supply being switched off (Day Zero has been moved forward to April 12). Cape Town has been in serious drought for 3 years. Local govt have been asking people to conserve water, and have been ignored. Premier Helen Zille,

“No-one should be showering more than twice a week at this stage. You need to save water as if your life depends on it because it does.”

Last year, Ms Zille revealed that she was showering once every three days. “I regard oily hair in a drought to be as much of a status symbol as a dusty car,” she wrote in a column.

Good for her, and for the reminder of what actually matters.

Running out of water couldn’t happen here, right? What I’d like to know is what happens if Southland had a drought 3 years in a row? Are there people at the regional and district councils asking these questions? Are they making plans? And what happens when at the end of the drought we’re still in climate change and we have another set of droughts in a few years? The whole game has changed, and there is no way back to normal now.

I’m not suggesting that Southland will experience what Cape Town is. I’m saying that we too have been warned and it’s time we started thinking through the shit that’s real. That means not just adapting around the changes, but doing everything we can to prevent the worst case scenarios of climate change.

As a post-script to that, Metvuw are forecasting a weather bomb for the South Island in a few days that will bring much needed rain. I really hope this eventuates for all our sakes. However this is the predicted climate change scenario for much of NZ. Increased rain but a longer time between rain events (PDF). In other words, drought/flood cycles. One of the problems with such cycles is that land becomes so dry that when it does rain the water just runs off instead of soaking into the ground, and it takes topsoil with it. What we need to be doing there is massively upskilling on passive water harvesting and regenerative agriculture which is more resilient to such cycles.

Moderator note: I don’t allow climate change denial under my posts. That’s conventional denial, but also includes assertions that its too late to do anything and we’re all going to die. I write about climate change so that we can be informed and  to take action. If you are not on board with that, please refrain from commenting.