Rain doesn’t cause most floods, humans do

While NZ goes through another increasingly frequent round of flooding and evacuations (how many has it been this year?), I thought it might be good to look at how sustainable design responds to water in the landscape.

Back in April, when Australia had some very large rainfall events of its own, permaculturist Geoff Lawton made a video of how the property he and his wife run handled all the extra water. The Lawton’s Zaytuna Farm is a sixty-six acre (27 hectare) property in northern New South Wales just inland from the coast. The climate is sub-tropical and the area’s annual rainfall is 1,300 mm, around the same as Northland.

Flooding is a confluence of factors not just rainfall. How much rain there has been in recent weeks and months is significant, but so is the landscape and any modifications. Sustainable land management talks about the land’s ability to hold water within the landscape. This isn’t just rivers, swamps and streams, it’s also the water being held in vegetation and in the ground, and much of this depends on the kind of soil and what is planted there. Conversely, if the land is too dry, it’s ability to absorb water is limited and water will just run across the top.

In NZ, pre-colonisation river systems were adapted to flood cycles because of the huge amount of vegetation. A river overflows its banks in a forest, and all that really happens is the trees and undergrowth slow the water down so that there is time for all the silt and soil to settle out onto the forest floor before the water returns to the creeks and rivers as well as being absorbed into the ground. That’s a fertility cycle too btw.

Chop those trees down and plant pasture and now the same landscape is a super highway for fast moving water that removes topsoil and any remaining vegetation as it rushes past on its way to the low point. This also impacts on human landscapes. When you have too much water moving too fast and overtaking the capacity to manage the volume of water in such a short space of time, towns and cities flood. We can tinker at the bottom end of that process (better drains, more pumps) or we can take notice of where the water comes from and how speed and time are critical factors. Then we can look at how we modify the land throughout the catchment changes the volume, speed and timing of water and where it goes.

In this sense much flooding is about what humans are doing. The same amount of rainfall can either bring health to an ecosystem or destroy it.

What sustainable design does is try and find the best of those varying factors, taking its cues from the shape and structure of the land and what will grow there, and balancing them with the need to produce food and other things people find useful. Mimicry of nature is central because nature already knows how to manage large amounts of water. The Lawton’s property has been intentionally designed to harvest water, spread it out through the landscape both to feed the soil/plants but also to mitigate flooding. On-farm dams, swales (water-harvesting ditches on contour) and overflow systems are the framework, 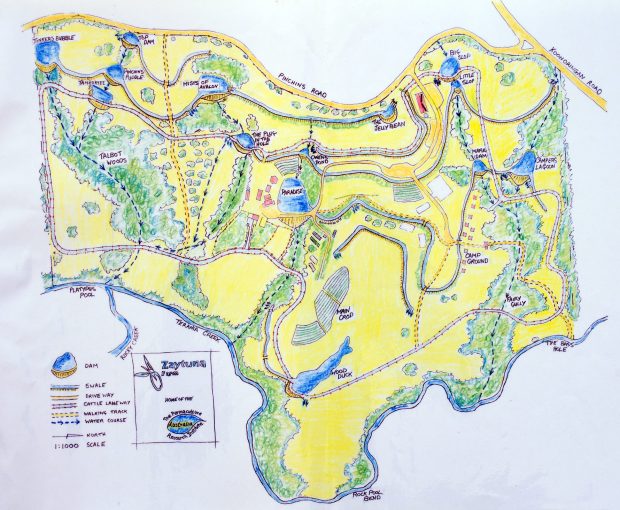 A central part of the Lawton’s design is pacifying the water. In their 9 minute video Geoff Lawton shows how their sustainability design pacified the water from the April deluge, preventing erosion and damage to infrastructure.

There’s a definition of resiliency there –  when you get 400mm rain in 24 hours and the worst erosion on your property can be repaired in ten minutes with a bucket and a shovel.

Another aspect of sustainable design is the principle of the problem is the solution. In countries that are increasingly experiencing drought, large event rainfalls in conventional land management are a liability because of the damage they do. In sustainable management large amounts of water are captured and stored, not just in dams but in the ground itself, so that in the long dry spells that follow the water is available as a much needed resource.

Given the new predicted climate change pattern for many places in NZ is higher rainfall but with long dry in between, we should probably start thinking about how to not just manage that but take advantage of it.

50 comments on “Rain doesn’t cause most floods, humans do ”