Wages rose for the rich and fell for the poor this year, according to a Employers and Manufacturer’s Association survey.

Managing Directors got a 3.7% rise from $190k to $197k, whilst the unskilled production workers beneath them saw their wages drop 6.5% or $2000 to $29.5k.  On average unskilled workers wages dropped, semi-skilled workers wages were almost static (before inflation), and skilled workers saw a rise at or about the same as inflation.  Management did best, although their rates varied wildly from double-digit to pay cuts; overall they managed more than 2.5%.  IT and Human Resources did particularly well for some reason.

So what do we learn from this?  The recession (along with its coming double-dip), combined with this government, hurts the poor the hardest.  They do the work that creates management wages, and they are getting ever less from it.

A less equal society causes many social problems, so why are we moving that way?

We need more democracy in the workplace (co-ops), greater unionisation so that workers can fight for better pay, and a better wage settlement system, where there can be national agreements on wages across an industry.  And we need the wealthy to realise that sharing the company profits will increase their own happiness.

Marty: Bunji beat me to the post but I thought this graph I made would be an interesting addition. It shows the average annual pay rise, after inflation under the National and Labour governments, for the 25 job types that are provided free by the EMA survey. Note that all were positive under Labour and more than half a negative now, only one is higher under National than Labour, and they’re ordered by income (highest at left) so the steeper trend line shows the difference in pay rises for high-income vs low-income employees has increased since the recession. 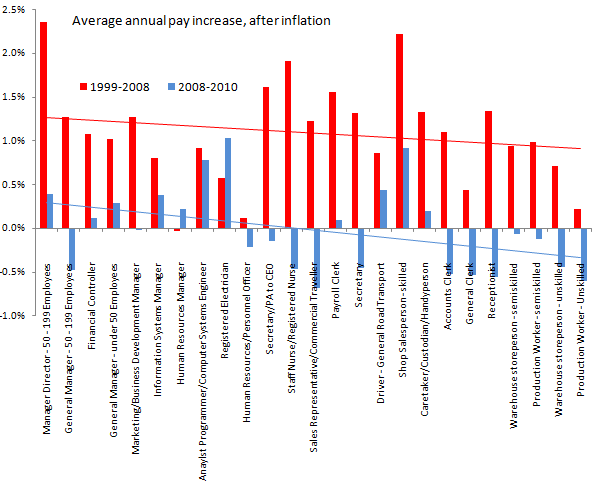