John and Bill cost us $7 million in two months

You’ll remember that in the Budget National decided to suspend payments to the Cullen Fund, which is designed to help fund the future cost of superannuation. At the time, John Key and Bill English said we were losing money on the Fund and we couldn’t afford to borrow to put money into it. They compared borrowing to put money into the Fund to putting money on the credit card to pay for a bet. More financially intelligent people pointed out that the markets were already rising from historic lows, making it the best time in a long time to be buying. The case was more akin to putting money in a high-return, long-term investment by increasing the mortgage a little. Indeed, the Fund has grown 33% since March and is now at a record level.

A Treasury leak revealed that, by Treasury’s own numbers, the Government would lose $8 billion in lost profits to the Fund and lost tax payments from the Fund by cancelling the payments. English bare-faced denied the truth of those numbers (has anyone else noticed he’s been at the centre of nearly every bad story for National since the secret tapes?).

The Government has reduced its contributions to the Fund to $250 million this year –  according to the Fund’s formula, $1,466 million should be put in. From next year, there will be no contributions. Already the decision is costing us millions.

In July, the Fund made 6.09% above the cost of government borrowing (6.31% basic return) . In August, it made 2.56% over the cost of borrowing (2.80%). But we’re putting only $21 million of new money in the Fund each month, rather than $122 million as we would be under if National hadn’t cut the payments. As a result of investing less money we’ve lost over $7 million in Fund returns so far and that will rise, at a compounding rate, every month that the Fund makes a profit. By 2022, Treasury says they will have cost us $8 billion. 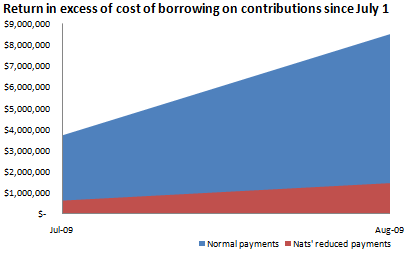 Gee, having an ex-Treasury official and a currency speculator in charge of the nation’s finances isn’t looking so great now, eh? It’s enough to make one pine for the shear bloody competence of Cullen and Clark.