Remember Key’s great innovative cycleway project that was his great idea for creating more jobs?  Well it seems it’s been limping along with some pretty poor planning, and inadequate government oversight: if they really cared about it, they wouldn’t be suddenly needing to look for more money to pay for it. The Weekend Herald reports:

One of the operators of the Prime Minister’s $50 million cycleway will charge mountain bikers for using public land to pay for the maintenance of the network of trails.

Bike Taupo will charge $40 for an annual membership to ride the Craters of the Moon tracks from January 1, using the money raised to fund the upkeep of the 90km stretch of New Zealand Cycle Trail it looks after.

The funding gap has emerged at other parts of the cycle network across the country after money was put forward to build the trails – but not to maintain it.

The Government is aware of the problem and says money will be sought to cover the gap in the Budget this year.

Originally devised as a Cape Reinga-Bluff track, it instead became a series of “Great Rides” the length of the country.

Bike Taupo chairman Rowan Sapsford said the organisation was among trail operators under financial pressure because of the cost of maintenance.

“Some tracks just can’t maintain the level they are built at,” he said. “The Prime Minister’s budget is for the establishment of them but not the ongoing maintenance.

The cycleways were built by contractors who failed to plan for maintenance costs:

The Weekend Herald understands the patchwork way in which the trail was constructed has created patchy need for assistance. In some areas, council partnerships cover maintenance costs while in others the Department of Conservation does the maintenance when trails pass land they administer.

Green Party cycling spokesman Kevin Hague – who has been closely involved in developing the trail – said operators were meant to have considered maintenance when pitching for the contracts.

And exactly how many jobs has it created?

Estimates for the quick-start projects estimate that each might occupy approximately 40 people in the initial construction period.[25] Prime Minister John Key noted that he expected about 500 jobs to be provided in construction of the cycleways in total, with up to 4,000 eventually created through tourism benefits the trails would bring.[20] In mid-2011, the newsletter of the New Zealand Cycle Trail reported 511 people employed on trail construction.[15] Job experiences from the Far North District were also positive – among other effects, it was reported that of 110 formerly unemployed young people who worked on the project for half a year as part of a government subsidy scheme, 80 had gone on to other work, rather than returning to the dole.[26]

So, some limited long term benefits for employment.

And the employment situation generally (following John Key’s one-big-idea cycleway project).  I previously posted about the findings of the 2013 census.

Those not in the labour force will include those recorded in the census as being on zero income.  This will include students, individuals supported by family or a partner: ie. some people wanting work but not eligible for benefits.  The proportion of people on zero income has increased significantly since 2006. About one third of people over 15 years are not in the labour force – up 10% since 2006.

So, the government’s hastily cobbled together cycleway proposal, while producing some benefits, has not been the magic bullet of job creation.  Meanwhile Key has continued to hop from cloud to cloud, smiling, waving….. 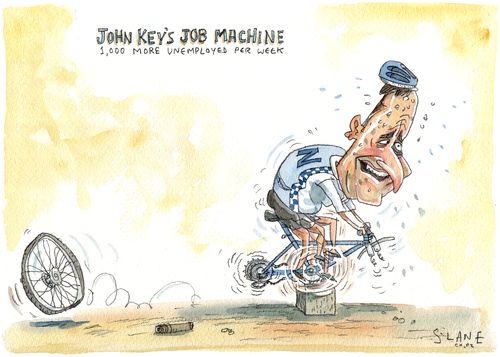 [*] David Fisher, author of the above quoted NZ Herald article, put the job summit in 2010.  As the link under the typepad-liberation cartoon shows, the job summit was in February 2009.  Well spotted Tracey!