Land tax – what’s the down side?

I guess this was predictable:

Figures released yesterday showed only 3 percent of homes were sold to overseas-registered buyers in the six months between October and March.

Officials have stressed the new figures do not accurately reflect foreign property ownership in New Zealand.

Indeed. Bernard Hickey, based on these figures, puts the rate at somewhere between 3 and 48 percent. Why would anyone base policy decisions on such nonsense figures?

Housing Minister Nick Smith conceded there were some deficiencies in the data, but overall he said the figures showed claims that foreigners were fuelling the overheated market were “simply a diversion”.
…
A land tax was now off the table for now, he said.

No matter what the rate of foreign ownership is, what’s the downside in a land tax on foreign buyers? It raises revenue. It will have some cooling effect on a melt-down market. It doesn’t disadvantage Kiwis in any way. So why not do it?

I still find it hard to believe, but combined with an unwillingness to take action on our tax haven status, it really does look as if this government cares more about the interests of the international rich than the local Kiwi. 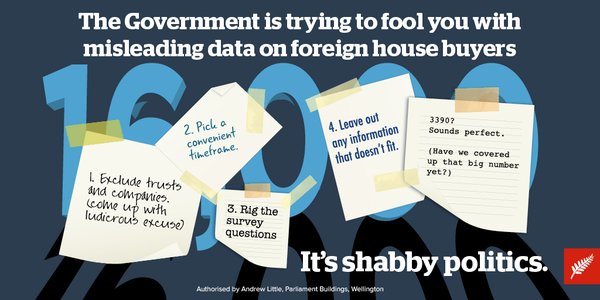