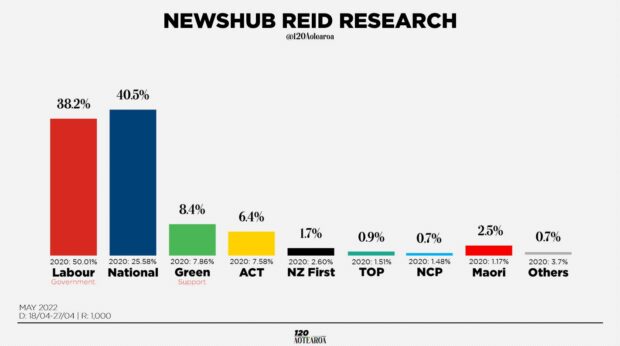 The latest Reid Research poll result has been released.  Basically it reflects other polls that have been recently conducted.  Except Roy Morgan which continues to be really out there.

It reflects the sense of general malaise that has gripped the country.  Those anti vax protests may have been based on some really weird reality but sapping of the general confidence they were.

But someone should tell the Herald about what has been happening recently.  Because they have taken a rather extreme view of recent events, ignored the other polls, and claimed there is a recent surge to National.

Here is the offending piece with the headline National surges and Labour plummets in latest poll:

Labour has suffered a dramatic drop in support in a new political poll but could still form a government, with Te Pāti Māori once again finding itself in the position of kingmaker.

National has shot up to 40.5 per cent, up 9.5 points in tonight’s Newshub-Reid Research poll from the company’s last poll taken in February.

Labour meanwhile has dropped 6.1 points to 38.2 per cent.

Suffering from National’s rise, Act has dropped 1.6 points to 6.4 per cent. The Green Party too has seen a slight drop, down 1.2 points to 8.4 per cent.

The dramatic surge depends on the writer having no idea whatsoever what the other polls have said.  But the article refers to these polls so the rhetoric is disingenuous at best:

Recent polls have also placed National slightly above Labour, the last one in April by Taxpayers’ Union-Curia putting the Opposition one point ahead.

This followed a 1News-Kantar poll in March that had National on 39 per cent and Labour 37 per cent. It was the first time National has been ahead of Labour since February 2020, a month before the Covid 19 pandemic tore through the world and New Zealand was plunged into lockdown.

The reality is that currently it is touch and go.  And once post Covid settles down I expect Labour to go ahead.  Chris Luxton is far too brittle a leader for National to be confident.