The good ship Muller has sprung a leak.

Tova O’Brien is reporting that the National caucus has been told today that Labour are on 55% support and they are 21 points back on 34%. That’s one point less than under Simon Bridge’s leadership.

That the caucus is leaking, only weeks after the coup and just two and a bit months before the election, has got to be as worrying for the Tories as the poll result.

Damningly, O’Brien reports that Muller initially refused to release the figures to his colleagues, preferring to show trend graphs instead.

But caucus insisted on being told the facts and were given the numbers verbally.

Another tough week at sea for Todd Muller.

A jumping rat and a leak below decks.

And now also featuring an MP who’s drowning not waving: 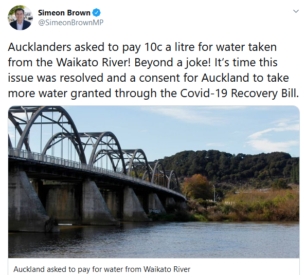 The proposed charge is actually 0.001c/l, a ten-thousandth of what Simeon says.

Turns out posing in front of that upside down flag in te Puna really was a sign of distress! 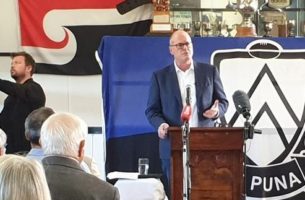