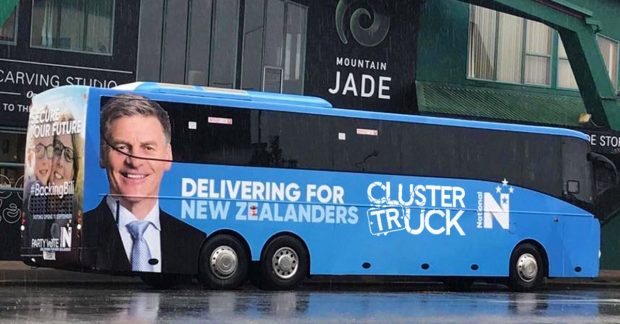 We have entered week two of National’s leadership contest.

I was heavily involved in the last two Labour leadership campaigns.  They were really interesting events, prospective leaders touring the country talking about what drives them to be involved in politics and seeking the support of the membership at large.  Members were really energised by what was happening and the feeling of democracy was palpable.

National’s current campaign is entirely different.  It is driven from the top and the choice of who will be leader will only be exercised by the few.

No one is allowed to say anything interesting.  Secrecy abounds.  On the surface everything is calm although beneath the surface naked political ambition and the desire for utu mean that blue on blue attacks are likely.

The insistence on public discipline is making the whole event rather meh.

There is a scene in Monty Python and the Holy Grail in which a French soldier looks at King Arthur and his knights and hollers “I fart in your general direction” before hurling livestock at them.

That scene is apparently the code of conduct for the National Party leadership contest.

Direct strikes are frowned upon so the candidates have taken to lobbing loaded statements in the general direction of their foes and hoping onlookers are smart enough to figure out who will be enveloped in the fug.

Although you get the impression that things are not what National claims.  Remember back when news of a coup on Bill English first surfaced and senior National members publicly insisted there was no leadership spill under way and Bill would remain leader for as long as he wanted?

And that news of the coup broke on the day he was to give a state of the nation speech but had its effect totally obliterated by the news of the leadership challenge?

Mark Mitchell gave the game away with his leadership campaign announcement when on February 19 he said he had been approached to stand some weeks ago.  News of English’s being rolled appeared on January 31.  People were lining up candidates at the same time that National was publicly saying English could stay as long as he wanted.

And no deals have been offered.  Not one.  No siree.  No inducements whatsoever are being offered and all MPs will vote based on what is best for the party and the country and not based on personal advancement.  Again from Claire Trevett in the Herald:

National Party leadership contenders all claim they are resisting appealing to the MPs’ baser instincts by refusing to offer roles or senior positions as part of their leadership bids.

The vote by National’s 56 MPs will be held next Tuesday to choose between Mark Mitchell, Steven Joyce, Amy Adams, Judith Collins and Simon Bridges as the new National leader.

It is understood some MPs have made it clear which roles they are interested in but all candidates said they have steered clear of promising positions to MPs to secure support.

And the saga about the Judith Collins support website gets weirder and weirder.

This is evidence either of extreme stupidity or a pretty evil false flag attack on Williams.  No doubt time will tell.

With a week to go anything is possible in this campaign.  But I suspect the current public calm is not going to last for long.