Not even miners will dig Gerry out 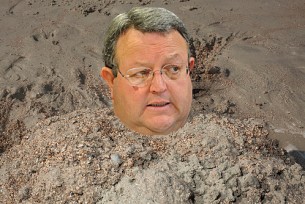 When you’re that far on the backfoot, it’s not hard to teeter further. The CTU has today come out against the Government’s mining plans; a position even Brownlee admits is “a bit of a surprise” given the union’s membership includes miners.

What’s the score now? I say time for a quick tally. We’ve got the world’s biggest environmental group slamming the plans, the Commissioner for the Environment giving them the thumbs down, 50,000 people voting with their feet, Lucy Lawless delivering a suprisingly knock out performance on Campbell Live, John Banks hoisting his flag up the anti-mining mast again, telling media “i’m totally opposed to mining. Everybody knows that.” And that’s to say nothing of Mike Moore and his bizarre comment about a wet finger.

Meanwhile, across town, the Auckland Regional Council has just come out in unanimous opposition to any mining on Great Barrier.

What say you Mr Brownlee? Could it be your resolve is slipping along with your footing?

25 comments on “Not even miners will dig Gerry out ”