From bad to worse for workers

While John’s off playing soldiers, things are getting worse and worse for Kiwi workers.

The Labour Cost Index shows wages and salaries rose just 1.5% between march 2009 and March 2010, the lowest increase in a decade and below inflation.

The Quarterly Employment Survey, also out today, shows that the average wage has fallen from $25.80 an hour (inflation-adjusted) when National came to power to $25.30 an hour now – a 2% drop in the average wage in a year and a half. I doubt even John Key’s backers cold have hoped him to deliver so rapidly on his pledge to “see wages drop”.

On top of all that, we have the tens of thousands of Kiwis who have lost their jobs, and are still losing their jobs. Indeed, the data on the reasons employers give for raising wages strongly suggests that it is higher unemployment that is letting them keep wages down.

The QES shows that employment (the QES doesn’t count self-employment) fell by another 12,000 in the last quarter. That series is only a rough guide because it isn’t seasonally-adjusted. We will get the headline unemployment number when the Household Labour Force Survey comes out onn Thursday. I had been expecting to see it fall back below 7% but with poor benefit numbers, weak job ads, and the QES data, that seems a trifle optimistic. 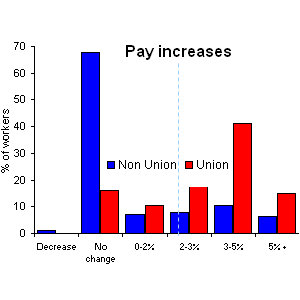 If anyone had forgotten why we call Key the ‘do nothing’ Prime Minister, these figures are a stark reminder.

A final note. Once again, it’s clear that joining your union delivers.

75% of non-union workers received a pay cut last year (that’s a nominal decrease, no increase, or an increase less than 2%). 74% of union members got a real pay increase, a pay rise above 2%. Most of them got a rise above 3%.

11 comments on “From bad to worse for workers ”