Another pair of TV polls, another embarrassment for Colmar Brunton as their poll goes widely out of line with the others even as TNS/TV3 is confirming the established trend. Still, neither of the polls looks great for the Left. National would govern alone under either result. 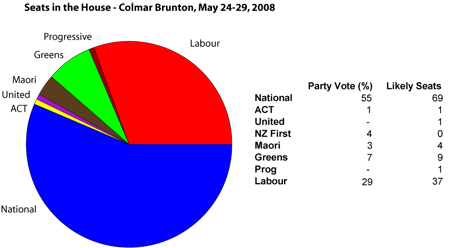 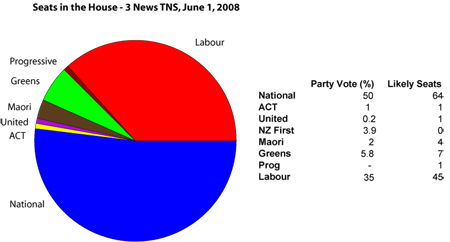 That said, given the trend of 35% for Labour, 6% Greens, National 50%, Labour is only 5% off its results in the last three elections and National is only a few percent clear of another losing result. Labour will believe it can claw back that 5% off National once National is, eventually, forced to release real policy. National must also think its policies will cost it votes otherwise it would not be leaving this dangerous policy void.

The one to watch in both polls is New Zealand First. They are moving up to striking range of 5%. With Tauranga also open to Winston now Burqa Bob is gone, it is looking certain that NZF will be back in Parliament, a negative for National – both because Winston favours Labour and more wasted votes makes it easier for National to get a majority.

Remember also, the Maori Party is likely to win more than the four seats assumed here. That will create a large overhang and the majority needed to govern may go as high as 63 seats. That gives more power to the Maori Party, another negative for National.