In the current series of posts we’re looking at the Office of the Children’s Commissioner (OCCC) 2012 report “Child Poverty in New Zealand evidence for action“. Continuing from last week…

1.4 The causes of child poverty

We all know the causes of poverty – but as I read them I can’t help but reflect that the National government seems to be determined in general to exacerbate them:

Low household income is a major dimension of child poverty and is the result of a combination of factors. These include labour market conditions, low skill levels or limited expertise, social and health issues, housing costs, and government policies and spending priorities. Low household income in New Zealand is frequently caused by unemployment, low pay and insecure employment. …

Lower educational achievement also contributes to child poverty. Education is a major route out of poverty, but currently in New Zealand there is a strong pattern of poorer educational achievement by children from lower socioeconomic backgrounds. This is shown in lower participation rates in early childhood education, lower levels of skills assessed at entry to primary school, and lower rates of achievement during both compulsory and tertiary education. …

Finally, government policies and spending priorities can significantly affect household incomes, particularly for families dependent on benefit payments. Issues include: access to, and the value of, benefit payments and tax incentives for working families; and unpaid child support and child support that is not passed-on to the custodial parent.

Whereas the CSHM report was very circumspect, setting out the data without political comment, this OCC report pulls no punches at all.

Mäori poverty needs to be considered against the backdrop of colonisation. Recent research documenting the experiences of Mäori whänau living in financial hardship notes that any analysis of the financial and material deprivation of whänau is incomplete without understanding Mäori economic development pre-colonisation, and the impact of land confiscation and war (Baker K., et al., 2012). The alienation of land and resources saw the loss of a cultural, spiritual and economic base (Cram, 2011). It has had a long-reaching impact that continues to shape attitudes towards Mäori in New Zealand. The devastating effects of racism and discrimination in health and elsewhere have been well documented (Reid, 1999; Robson & Harris, 2007; Mills et al., 2012). The legacy of colonialism has been the ‘differential distribution of social, political, environmental and economic resources and well-being within this country with Mäori bearing the brunt of disparities in many areas’ (Cram, 2011, p156).

1.5 The consequences of child poverty

Once again the message that it isn’t a level playing field is loud and clear. Poverty disadvantages kids and perpetuates an inter-generational cycle. The description here, however, is more complete than the usual summaries:

Child poverty can negatively affect child development in numerous ways. As illustrated in Figure 1.7, one pathway impacts on the ability of parents to invest in their child’s development via the simple provision of material resources (e.g. nutritious food and educational opportunities). A second pathway works via sub-optimal child-rearing practices that result from poverty-related stress that is experienced by parents (e.g. relationship difficulties and parental mental health problems). A third and newer major pathway represents the biological embedding of socioeconomic stress via dysregulation of stress-sensitive biological systems, namely, the nervous, immune and endocrine or metabolic systems (Aber et al., 2012; Danese et al., 2009; Ziol-Guest et al., 2012). These pathways do not exist in isolation; rather they tend to co-exist, reinforcing or exacerbating one another (Conger & Donnellan, 2007). 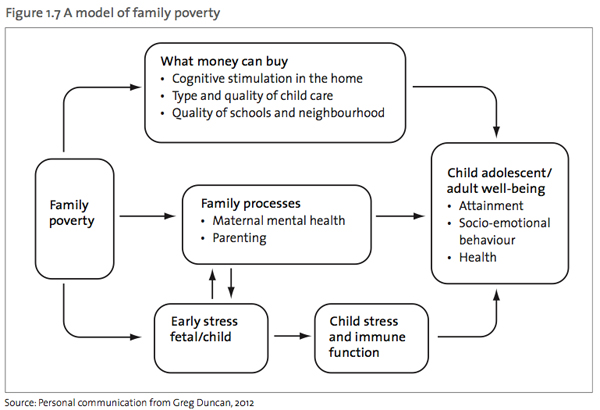 After summarising the quantifiable consequences of poverty (most of which will be familiar if you followed the CSHM series of posts) this report focuses on a few specific topics. One of the most important (in my opinion) is education:

Educational achievement: There is both New Zealand and international evidence that childhood poverty has negative impacts on cognitive development and educational attainment (Biddulph et al., 2003; Duncan & Brooks-Gunn, 1994). Poverty impacts on learning in practical ways. Children who lack adequate food have difficulty concentrating, have lower academic achievement and poorer performance, especially in numeracy and literacy, and are more frequently absent or late to school than their peers (Yates et al., 2010).

The wider social and economic costs: Child poverty imposes a high cost on our society and economy. In the short-term, the government spends a significant amount on remedial services to treat the effects of child poverty, including primary health care and hospitalisations, housing subsidies, benefit payments and tax credits to low-income and unemployed families.

Long-term child poverty is detrimental to New Zealand’s economy. Adults who were raised in poverty as children have less earning capacity, so there are productivity costs and a reduction in government revenue through lost taxation. Children who grow up in poverty are more likely to participate in crime, incurring costs for our criminal justice system. There are also significant additional costs in treating the health issues of adults who grew up in poverty.

International evidence suggests that child poverty rates such as those experienced in New Zealand pose an economic burden in the order of 3-4 percent of GDP (Holzer, et al., 2008; Infometrics, 2011). As noted earlier in this Chapter, the evidence also indicates that severe and/ or persistent poverty, especially in early childhood, is the most costly, both for society and the children concerned. There is, therefore, a good case for spending more in the short-term to prevent the longer-term negative impacts of poverty.

As I note every week in the footnote, the costs of child poverty are in the range of $6-8 Billion per year, but the Nats refuse to spend the $2 Billion that would be needed to really make a difference. Even in purely economic terms National’s attitude makes no sense.

Well, that’s long enough and we’ve only covered two sections today, but this first chapter is a very significant one (the next couple of chapters will be quicker). We’ll finish Chapter 1 next week.

In current news, keep an eye on the Mana party’s Feed the Kids Bill – “Feeding the kids should be our first priority as a nation”. Mana are calling for widespread support – and from the looks of their website they are getting it!

In a statement of support the Tertiary Education Union (TEU) once again notes the impact of poverty on education:

TEU’s annual meeting of Māori members, Hui-ā-Motu, is backing the private member’s bill before Parliament that aims to provide all children in decile 1 and 2 schools with free, nutritious breakfast and lunch meals. …

“Child poverty in New Zealand has doubled over the last thirty years. About 270,000 (25 percent) children live in poverty. Because of that poverty, it’s estimated that around 80,000 children go to school without a proper breakfast and lunch each day. Hungry children find it difficult to concentrate and learn, and therefore their health and achievement suffers significantly. Here’s an opportunity to do something to address that.”