What provokes a populace to take to the streets in violent uprising? Is it the inexorable power of a demand for justice and democracy? Or is it something much simpler than that…

Take the case of the recent “Arab uprising”, often claimed (here in the West) to be a popular democratic movement.  That’s a “feel good” kind of message, but it probably isn’t true.  A recent analysis (not yet peer reviewed) by the New England Complex Systems Institute suggests a much simpler explanation.  The Guardian reports:

A provocative new study suggests the timing of the Arab uprisings is linked to global food price spikes, and that prices will soon permanently be above the level which sparks conflicts

Seeking simple explanations for the Arab spring uprisings that have swept through Tunisia, Egypt and now Libya, is clearly foolish amidst entangled issues of social injustice, poverty, unemployment and water stress. But asking “why precisely now?” is less daft, and a provocative new study proposes an answer: soaring food prices. …

The first part of the research is straightforward enough: plotting riots identified as over food against the food price index. The correlation is striking, but is it evidence of causation? 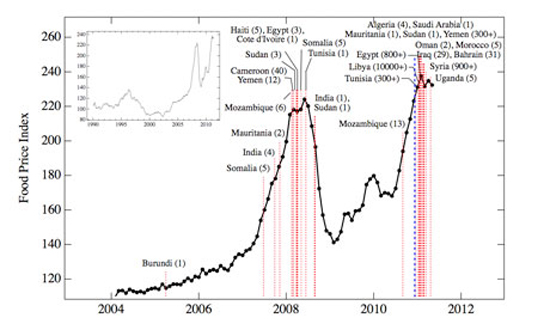 Bar-Yam says this conundrum can be tackled by asking the question in clear ways. Could the riots be causing high food prices, rather than the reverse? No, the former is local, the latter global. Could the correlation simply be a coincidence? Yes, there’s only a tiny chance of that, Bar-Yam’s team argues in the paper. … The next part of the study identifies that the serious unrest in North Africa and the Middle East also correlates very closely with a food price spike. …

This particular example fits with the trend observed over a longer time period:

Cyclical climatic changes double the risk of civil wars, with analysis showing that 50 of 250 conflicts between 1950 and 2004 were triggered by the El Niño cycle, according to scientists.

Researchers connected the climate phenomenon known as El Niño, which brings hot and dry conditions to tropical nations and cuts food production, to outbreaks of violence in countries from southern Sudan to Indonesia and Peru. …

Read on in that piece for many more examples. And see here for the World Bank warning on soaring food prices world wide.  As long term climate change begins to seriously disrupt food production in many parts of the world, we are in for a very bumpy ride.

44 comments on “Revolution and hunger ”