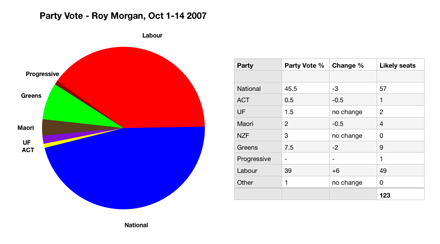 Gary Morgan said of the result:

As was suggested in the previous New Zealand Morgan Poll, National Leader John Key’s recent policy gaffes have handed Helen Clark and her Labour Government a golden opportunity to make up some ground.

In the first fortnight of October, Labour has closed the gap from 15.5% to 6.5% Ãƒ¢Ã¢â€š¬” the closest it has been since early February.