Tripling down on financial illiteracy with Amy Adams (and MMT)

Amy Adams won’t commit to $11.7b, but she too has now become the third person to fall down the imaginary fiscal hole. How can National claim to have any soundness on finance if they won’t admit their criticisms on the economy are unreasonable and unfounded? And besides, aren’t National actually worse fiscal managers if ordinary people tend to get paid less under their regimes? We dive into some theory to thoroughly dispute even Steven Joyce’s/Amy Adam’s secondary criticism of “fiscal tightness,” although concede that two of the Budget Responsibility rules are probably stupid in order to do it.

The IMF warns that our household debt is far too high, as desperate tenants start raiding the Kiwisaver accounts to pay the rent.

The cost of education

National needs to do something to address spiraling education costs in both the secondary and tertiary sectors.

Trump and the NZ housing bubble

The bright orange trigger for a sharp rise in mortgage interest rates may have just arrived. Our over-indebted home owners are highly vulnerable.

Herald: “…the Government ought to be banking surpluses, just as Sir Michael Cullen did during the boom of 2000-2007”. 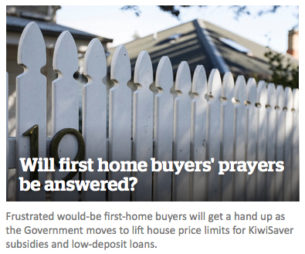 A petition: “As Minister of Social Development we call upon Minister Anne Tolley to urgently forgive all debts incurred by people who have been forced to stay in Motels as emergency accommodation….”

National the party of economic lunacy

A “$17 billion hole in the economy”. An estimated $18 billion lost because National stopped investing in the super fund. A record national debt. And we’re still talking about tax cuts? Lunacy!

Greece and the Euro crisis

The invisible hand of the market is busy punching itself in the face today. Some observations on Greece and the Euro crisis, from the factual to the fun, courtesy of Twitter this morning.

Fairfax posted an article recently where three businessmen were interviewed on what they thought the political parties should be discussing this election year. The comments from the first interviewee were basically a John Key love in so I thought we should try and provide some balance …

Bank profits are up again. A 10 per cent increase over the past three months it was announced yesterday. What we don’t often hear though is how this profit is generated. It basically goes like this. Bank staff are all under sales targets. They need to sell a certain level of debt to meet these […]

This family budget is in terrible shape.  I can’t see any way out, can you?

Free trade is meant to be about opening up markets for our exports so that we can improve our trade balance and, ultimately, become less indebted as a nation. Yet the opposite seems to be happening. Darkhorse shows that this is the experience of all countries that lower their trade barriers in a still largely protectionist world.

The PSA is launching its election campaign this evening.   Our big challenge is to break through the government’s narrative (now reaching  mythic proportions)  that NZ is sinking under debt the likes of Greece  tooand the only solution is to cut public spending and sell assets. As the well informed readers of The Standard know, NZ’s […]

The CTU’s Economic Bulletin: The 2011 Budget was a victory of story-line over needs… The Budget has no plan to put right New Zealand’s social and economic imbalances, and does little to start cutting back the overseas private debt… The Budget of a thousand cuts put debt and deficits ahead of people’s needs and a plan for the future.

Eye on the Banks

The next  Fabian Seminar at Connolly Hall Thursday 31 March at 5:30pm will feature economist Geoff Bertram examine how the high level of New Zealand’s overseas debt that figures prominently in much policy discourse is largely an increase in foreign-currency liabilities voluntarily taken on by mainly Australian-owned banks in pursuit of private profit. It will be interesting – all are welcome to attend.

John Key is busy raising the canard of our economy being as indebted as the PIIGS countries that are in trouble in Europe.  He’s talking about net foreign debt, and he’s suggesting lowering government debt is the solution. But New Zealand’s debt problem is not a government debt problem, and with asset sales he has the wrong solution to the wrong problem.

Even Fran O’ Sullivan has been moved to admit that debt is getting out of control and our current Emperor has no economic clothes.  She sets out a top ten action list, the usual regressive right wing stuff.  What would a leftie action list look like?  What would be on your top ten list for reducing debt?

Well, I’m pleasantly surprised. For once, Paula Bennett has played it straight on the benefit numbers. She hasn’t slapped herself on the back, even though last month’s benefit numbers are the best we’ve seen on her watch (in line with normal seasonal variation). If only Bill English could follow suit, rather than claiming credit for illusionary movements in the government’s books.

Jingle Bells – walking away from debt

In the US it is easier than NZ for home-owners to walk away using the jingle mail options in the US. However in NZ it is far too easy for businesses to do the same. Slate Magazines article “Everyone’s Defaulting, Why Don’t You?” by Daniel Gross points out the absurdity of expecting home owners hit […]