The bigotry of lemmings – the China scare

I can’t think of the number of countless times that I have seen scare stories about someone wanting to take over this society and/or the world. Sometimes they are even correct about intent, but usually they are not. Usually the difference between what is insinuated and whatever facts are known makes those making such insinuations just look like attention-seeking nuts.

We appear to have another one in the current claims about the government in China which look just as reliable as many previous claims – just simple badly thought through bullshit that resonates with previous similar claims about the Soviets, the Americans, the Japanese, and even the Polynesians or even further back about the Irish.

Personally I just view all such claims with a  healthy degree of skepticism, a demand for verifiable facts about implementation, and warrant me having a look at the relevant laws and regulations that govern this society. In my opinion, in NZ all of these historic scares were all simple crap put out either through simple bigotry or through simple-minded short-term self-interest. The New Zealand civil war was a direct result of one.

Most of the time the story falls apart on the second – verification about implementation. Fran O’Sullivan has highlighted one such in “Academic Anne-Marie Brady draws long bow on China“. Brady has recently released a populist book about Chinese influence in New Zealand. O’Sullivan discusses the book in general and then targets a specific innuendo with a pointed discussion of the facts.

Take, businesswoman Ruth Richardson who is listed in a section of Brady’s paper titled ‘Making the foreign serve China.”

Brady opines that former politicians with access to government are a “valuable commodity”.

Now I’ve never been a particular fan of Ruth Richardson. She has always appeared to me to a be cheer leader for some pretty bloody stupid half-baked policy ideas that have been misappropriated from the business sphere and attempted to be applied to  social sphere. It has taken nearly 30 years to even start to repair the damage from such foolish measures.

But she was just a legal policy wonk who’d been exposed to business thought of the time, but who clearly didn’t fully understand the limits of the implementation on scales larger than a single company (and it is hard enough to do even in that limited scope). However during her political career some of the legal reforms she undertook were worthwhile contributions – mainly the Fiscal Responsibility Act to limit shonky book keeping in budgets.

Subsequent to her political career she has been an interesting and reasonably successful company director with a good eye for innovation. It is that juxtaposition of political and business that Brady targets

Shanghai Pengxin – noted for its interest in New Zealand’s farms as well as near space – owns 74 per cent of Synlait Farm.

The latter statement may be factually true. But the juxtaposition Brady employs leads to unfortunate inferences.

A contextual response would have noted that Richardson was a former chair of Synlait Group well before any Chinese involvement (since 2003).

And that the originally private dairy company – which was led by the vigorous Canterbury entrepreneur John Penno – had failed to convince New Zealand shareholders to invest their capital with it.

In essence the article details the way that the investment into a local company played out. And then makes the point :-

But Synlait itself has been an innovative success. A strong employer in Canterbury. It has driven exports not just to China but to the Asean markets and moved far swifter than Fonterra for instance to invest in value add.

As Richardson noted in a paper earlier this year when talking about the NZ investment deficit – ” it is no secret that the NZ capital markets refused to fund Synlait at the outset – were it not first for Japanese and then Chinese investment we would have been stopped in our tracks.”

Does this make her a political tool?

Hardly, as would be apparent by the range of commercial roles she also holds including chair of NZ Merino, KiwiNet and Syft Technologies.

Yes she is a Bank of China director. But having political nous as well as business smarts should not be a disqualifier. Notably BOC is governed by the Reserve Bank here of which Richardson is also a former director.

I’d agree. I can’t see the relevance of this example to Brady’s argument. From what I have seen from reports about both her book and academic writing it falls into the same category.

Useful that someone is looking at it from a different angle. Not useful that there appears to be simple-minded scare tactic with implied levels of bigotry involved. I’d hesitate to state that the other reports about a burglary and tires being let down aren’t related. However I am confident that the widespread reporting of them is just a simple marketing ploy for the book that massively diminishes any desire that I have to look at such tainted material.

It is like the post by Advantage here the other day – “China, Huawei and us“. I didn’t bother to deal with that in the post. It just got filed as being a post I’d need to respond to in a full-length piece.

For instance where it says :-

Charles Sturt University academic Clive Hamilton made a submission to an Australian inquiry this year detailed what he said were attempts by groups linked to the Chinese government to exert influence on Australian society.

Oh FFS: Advantage – try reading the laws on defamation here and in Australia.  If someone makes a claim of fact about someone or something else that could not cannot substantiated in court, then that is defamatory.  Yes – you can claim public interest in making a defamatory claim if you don’t have the facts. It often helps on the awards.  However you have to be able to use more than the submission that is roughly equivalent to “some joker told me in a pub”. My guess is that is all that Hamilton was able to provide Allen & Urwin’s lawyers with. So they turned down the text that Hamilton was unwilling to change to a lawful form.

Similarly as a tech geek, I could take everything that Advantage discussed about Huawei’s network systems and apply it exactly to Cisco or any other major American supplier of the same equipment.

US tech providers too are subject to their countries security laws about what they should do with equipment and software sold offshore, have backdoors added,  and that equipment is regularly used to spy. The relevant legislation looks very similar to Chinese laws and isn’t even loosely covered by constitutional protections that should (but don’t) prohibit such intrusions on US citizens.

Citizens from other countries have no such protection. Such vendor enabled spying is something that has been widely suspected in the tech communities for decades about the US. It is such a obvious move.

It was stunningly confirmed by Edward Snowden’s revelations in 2013 and 2014. See BBC summary

After fleeing to Hong Kong, Edward Snowden told the South China Morning Post that the NSA had led more than 61,000 hacking operations worldwide, including many in Hong Kong and mainland China.

“We hack network backbones – like huge internet routers, basically – that give us access to the communications of hundreds of thousands of computers without having to hack every single one,” Mr Snowden was quoted as saying.

That has been confirmed in the materials that were subsequently provided via several sources. It directly resulted in changes the laws of many countries, including China, to enhance their internal network security.

Or are we led down a slippery path of suspicion, holding Chinese companies to a level of security accountability that is absent when I open my American Motorola phone, Apple computer, or Oracle software?

Advantage is simply being stupidly naive or just hypocritical. Any tech will tell you to always assume that any networked system is insecure. Even the most secure networks known are regarded as being way less secure than almost any other type of storage and transmission system.

In this case I’d regard all of the above as being probably easy enough to be accessed because of  the legal requirement for the vendors to help the US security agencies. They probably would be able to argue a case against intrusions on US citizens inside the US, and I know Apple does. But none would have much hope of arguing it legally about accessing it to spy on NZ.

Any system that is supplied from countries that have laws that demand that tech exporters are required to help their spy agencies spy offshore is by definition insecure. China, the US, England, France, Russia and Israel just to name some that I know have such legal provisions. Probably Australia and New Zealand as well.

Perhaps telling us why there is a focus on a single country rather than on the multiplicity of countries who require exactly the same obedience by their tech companies would be revealing. It was certainly the question that was raised in my mind after reading Advantage’s post.

Similarly on most of the economic arguments about China apply just as equally to the US.

The effective freeze in US investments here is measurable between 1984, the nuclear free legislation in 1987, and even later. The effective veto of the French on NZ exports to the EU after their agents bombed the Rainbow Warrior was the same. I’m sure that I could point to others if it was worth doing. But it is a risk with ANY trading partner.

We are always subject to the economic displeasure or even disinterest of other states. We need to structure our economy to suit by maintaining a multiplicity of markets and suppliers. This became pretty damn obvious after Britain started talks to enter the EU in the 1960s.

In fact I can’t really see the point of such simple minded scare tactic idiocy about China. At this point the only real alarm point I could see with China (which they shared with the US) was and probably still is our lax policies on purchases of property by overseas buyers. That caused significiant speculation in properties here that was effectively ignored by the government of the day.

Subsequent changes in regulations for taxation and migration  plus the Chinese government taking its own efforts to limit the hemorrhaging of safe haven money to NZ have certainly quietened the speculation.

I’m going to file this current mania about the Chinese government interference along with the stupid scare tactics of yesterday – it resembles that about the Japanese in the 1980s. 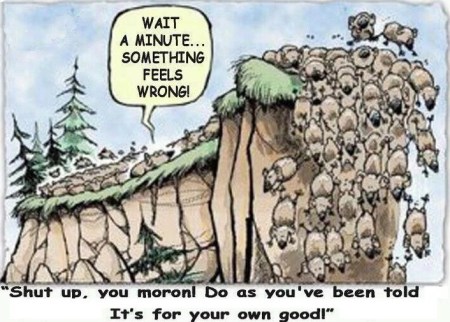 But as usual I’ll keep a watching brief just as I do for other countries – just in case I need to actually get interested.

134 comments on “The bigotry of lemmings – the China scare ”