I was looking at Feeds on the right hand side of the site, and saw an interesting post from Briefing Papers titled ““Follow the Money” Archives new Zealand, the National Library and the Department of Internal Af..”. However it appears to have been taken down (more on that later 1).

But there was a series of posts on the New Zealand Civil War from Otago and Wellington University that were interesting.

History is not just an account of past events, but an interpretation. Which historical events are taught in schools, and how they are presented, communicates an important message to pupils about national identity.

Currently, in New Zealand, these important decisions are left in the hands of individual educators. The 2010 curriculum requires pupils to develop skills of historical enquiry, but does not specify any compulsory topics. The curriculum does nothing to prevent educators ignoring events or perspectives that they do not personally consider important. This means that teachers can be influenced by their own biases when selecting which time periods, and whose perspectives, they share with their pupils.

Despite growing diversity among pupils in New Zealand’s state schools, 74% of primary and secondary teachers are of Anglo-European ancestry. While this does not mean they will all have biases that impact their teaching, research suggests New Zealand’s history teachers often avoid any topic they deem controversial. In fact, there is evidence that a core group of around 20% of history teachers resist engaging with New Zealand’s colonial history, including the New Zealand wars. As a result, many schools continue to teach European history while ignoring key events that have shaped the development of New Zealand society into the present.

New Zealand is a place that really doesn’t go much for rah-rah patriotism or even basic civics. Sure there are some crazies 2 who seem to pour their patriotic instincts into sporting events and wave their favorite flags for region or country of origin. But I guess it keeps such obsessives carefully involved in inconsequential things that don’t impact the rest of us too much.

But it is extremely important that we don’t leave our young (and old) to ignore our history and its effects. I’d say that there is simply nothing as important in New Zealand as understanding where our society formed and what the enduring effects of it are. And I can’t think of anything else that was quite as important the our civil wars of the 1845-1872 (and onward).

My ancestral families settled here from the 1820s and right the way through this period. So like many of the descendants of that period, I’ve always been aware of it, and it forms a large part of my thinking on our society. Moderation and a clear understanding is what is required to deal with the fools, bigots, and demagogues who, for their own selfish purposes, are willing to let this society fall into civil conflicts.

If you look at the partisan and ill-informed debacle that is the state of United States politics over the last couple of decades (or even our Australian cousins) you can probably see why that is a good thing.  While we tend to muddle on with our largely understated and often unstated constitutional matters. It generally seems to work out with a lot of hiccups and bumps on the way – but with a clarity of dialogue. Both internally and externally..

Since the second world war, we have largely tended get involved in other countries militarily when it is required internationally. Like supporting the process of independence in East Timor, the civil conflict in the Solomon Islands, trying to deal with the chaos spilling into other societies arising out of the anarchy of Afghanistan, the disintegration of Yugoslavia,  etc.

Of course that list isn’t complete, as it seems to skip a few like Vietnam, Borneo, Malaysia, and others that were done not as part of international multilateral efforts. Generally multilateral internationalist efforts to diminish conflicts tend to work way better than the other almost imperialistic interventions.

But our lack of any sense of a patriotic divine mission tends to mean that we don’t often get too involved in daft unwinnable wars with dubious objectives. For me there is nothing worse than the “Coalition of the Willing” in the illegal, unwarranted, and outright stupid 2003  invasion of Iraq. History has shown that we’ve good reason to stay out of such strange disasters. 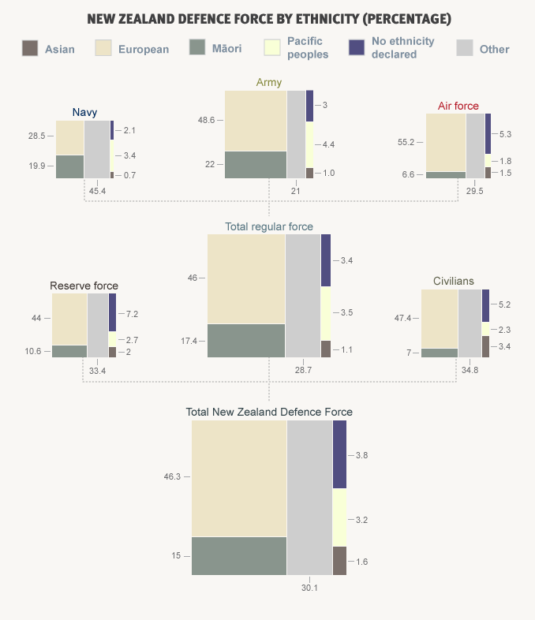 Note: most responses in the ‘other’ ethnicity category were ‘New Zealander’ or ‘Kiwi’.

That over represented percentage of Māori (approx 15% of the population identify as Māori) in our army represents a population who are still directly dealing with the after effects of an ill-advised and rather stupid military conflict that started here about 150 years ago. As any soldier involved in the post-WW2  army is aware, the vast majority of soldiers and especially the professionals are either Māori  or from families that have been long settled here. They also tend to be the most skeptical about reasons for deploying the military and demand clear rationales.

The reason for this is some bloody stupid political deployments of the military in the past. Our civil war and the Gallipoli campaign in particular. Or the proposed deployment of the SAS by David Lange to Fiji in 1987.

There is however no better example in our history of the root causes of our own colonial politicians deployment of British Imperal and settler troops in 1860. they were triggered by simple greed and scams over land and a monumental set of misunderstandings. As Wikipedia summarizes:-

Though the wars were initially localised conflicts triggered by tensions over disputed land purchases, they escalated dramatically from 1860 as the government became convinced it was facing united Māori resistance to further land sales and a refusal to acknowledge Crown sovereignty. The colonial government summoned thousands of British troops to mount major campaigns to overpower the Kīngitanga (Māori King) movement and also acquire farming and residential land for British settlers.[4][5] Later campaigns were aimed at quashing the so-called Hauhau movement, an extremist part of the Pai Mārire religion, which was strongly opposed to the alienation of Māori land and eager to strengthen Māori identity.[6]

At the peak of hostilities in the 1860s, 18,000 British troops, supported by artillery, cavalry and local militia, battled about 4,000 Māori warriors[7] in what became a gross imbalance of manpower and weaponry.[8] Although outnumbered, the Māori were able to withstand their enemy with techniques that included anti-artillery bunkers and the use of carefully placed pā, or fortified villages, that allowed them to block their enemy’s advance and often inflict heavy losses, yet quickly abandon their positions without significant loss. Guerilla-style tactics were used by both sides in later campaigns, often fought in dense bush. Over the course of the Taranaki and Waikato campaigns, the lives of about 1,800 Māori and 800 Europeans were lost,[4] and total Māori losses over the course of all the wars may have exceeded 2,100.

It is a conflict that caused widespread dislocation and dispossession of the Maori population with some pretty severe medical effects (to the point of nearly wiping out the Maori population through introduced diseases), and bigot driven distortions in the subsequent society that last through to today.

Large areas of land were confiscated from the Māori by the government under the New Zealand Settlements Act in 1863, purportedly as punishment for rebellion.[63] In reality, land was confiscated from both “loyal” and “rebel” tribes alike. More than 16,000 km2 (6,200 sq mi) of land was confiscated. Although about half of this was subsequently paid for or returned to Māori control, it was often not returned to its original owners.[64] The confiscations had a lasting impact on the social and economic development of the affected tribes.

The legacy of the New Zealand Wars continues, but these days the battles are mostly fought in courtrooms and around the negotiation table. Numerous reports by the Waitangi Tribunal have criticised Crown actions during the wars, and also found that the Māori, too, had breached the treaty.[65] As part of the negotiated out-of-court settlements of tribes’ historical claims (Treaty of Waitangi claims and settlements), as of 2011 the Crown is making formal apologies to tribes.[66]

The social effects and costs show directly within our society. No more so than the appalling and persistent ethnic makeup of our prison population. From the Stats department (my highlights) :-

That appalling statistic is a direct consequence of a poorly conceived and badly run war by self-interested settler politicians in the 1860s and the subsequent deliberate political disintegration of Māori society through various policies.

So when you hear your next ill-informed romantic or bigot on radio, family or in the pub who clearly hasn’t had their civics and history lessons, ask them when they served and if they understand our own history. And pressure those educators to grow a spine to explain this episode with all its gory detail to our kids.

You’ll be doing them and us all a favor. Remember

67 comments on “My civics – the New Zealand civil war ”