The Flag will make us rich 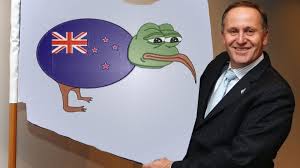 From the you have to be joking file, John Key thinks that the new flag will make us rich.

As reported on stuff:

He argued that the flag would make New Zealand money in the long term.

“How much is it worth ultimately if we change our flag and people recognise and buy our products?

“Basically in the end it’s gonna be worth billions over time.”

If he is right maybe we should get two national flags. Or three. Or change it every year.

66 comments on “The Flag will make us rich ”