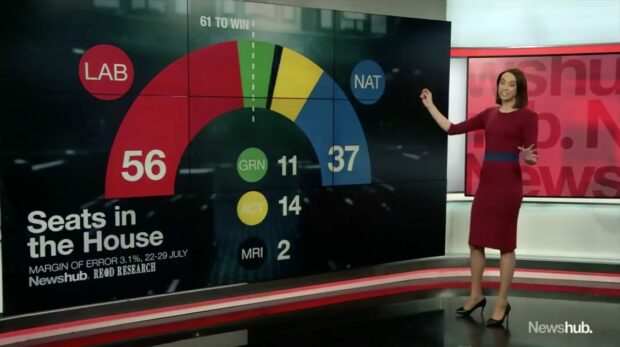 Last night’s Reid Research poll provided an interesting result.  The normal caveats apply, an individual poll should not be relied on and we need to see a few more polls before we can ascertain a trend.  But it suggests that Labour’s historic high support has declined to more traditionally realistic levels.

I cannot say I am surprised at the general direction.  The previous Reid Research poll results seemed to be overly optimistic.  And winter is sometimes the time of discontent, too many wet days and not enough sunshine.

In terms of what has been happening recently the unrelenting negativity of the Herald and talkback radio appears to be causing a response.  In particular elements of the media have attacked the Government’s competence on the handling of Covid.  I would still rate it extraordinarily high, best in the world, but there is a general fatigue among the community after 15 months of response and suddenly it feels like news of every slight misstep is being amplified.

The Herald in particular has not been helpful.  As an example this weekend’s mass vaccination event in Manukau has concluded and by all accounts has been highly successful.  By all accounts except from the Herald point of view who chose to amplify news of delays on Friday and catastrophise the event as the system bedded in but then posted somewhat muted commentary as the system righted and worked perfectly.

The Government is still being hammered about the pace of the vaccine roll out even though the pace and design of the system is based on us remaining covid free.  We have the luxury of an orderly roll out, not the accelerated roll out of other nations fighting to keep the virus under control.

The consultation on changes to the hate speech law has been somewhat ham-fisted.  Official comments have lacked clarity and into the vacuum have rode the opposition pushing a variety of conspiracy theories.

National is still in the doldrums.  There is no respite in sight for Judith Collins.  And David Seymour is obviously favour of the month right now.

But this result will shine a light on some of his MPs who so far have not been tested.

I don’t think too much should be read into this.  But it is a reminder that the Government needs to be more nimble, clearer in its communication and competent in its management.  And remember to campaign using hope which is the perfect antidote to fear.