The views of various commentators are starting to percolate through and range from the obsequious to the surprisingly well informed.

Obsequious is the only word available to describe this pitiful attempt by Larry Williams who is starting to write in the Herald.  He shows that he has taken the leaker’s spin hook line and sinker and says this:

The judge looking at David Bain’s compensation claim has found it doesn’t meet the legal threshold.

Judge Callinan reasoned Bain is not innocent beyond reasonable doubt. In order to meet the legal threshold for compensation, the judge had to find “exceptional circumstances” and he didn’t.

The process hasn’t been bungled at all. Judge Binnie’s review of the case was flawed, which meant that another judge had to look at it.

The basic problem with his comment is that Minister Amy Adams said the threshold was proof of innocence on the balance of probabilities.  A clearer example of shifting goalposts is hard to imagine.

Why should Bain still be eligible for compensation?  Because if he shows he is innocent on the balance of probabilities it is clear that the original conviction should not have occurred.  There is a wide gap between establishing innocence on the balance of probabilities and proof beyond reasonable doubt.  William’s suggested test, proof of innocence beyond reasonable doubt, is so difficult to meet it would only be in the most exceptional, and probably science assisted, cases that this would occur.

Williams also says that claims the report was leaked by the Government are “preposterous”.  Well someone leaked it.  The Greens are right.  There should be an inquiry into who did.

Duncan Garner’s analysis is more balanced.  He thinks that it is more likely than not that Bain committed the murders.  He then says this:

Which brings me to the compensation claim. I believe this Government is biased against David Bain. I believe the decisionmakers believe David Bain killed his family. Like every other New Zealander, these ministers have read and followed the trials for decades. It’s been impossible to ignore.

They have been unable to divorce themselves from their personal views. It’s completely unprofessional. For that reason, Bain can not get a fair and independent compensation hearing under this Government.

It’s impossible and we’ve seen that. Bain’s claim needs to be heard by a truly independent panel away from the clutches of Government. And this time the findings can’t be ignored because they don’t gel with the ministers think.

But that’s not how it works here. The decision is highly political, not legal. This Cabinet doesn’t want to pay him a cent because they don’t believe he’s innocent.

Ministers have spent millions of dollars shopping around for a report that fits their view. The indisputable fact is that Bain was found not guilty in the retrial.

You might not like that decision, but the justice system stops being a system when politicians can pick and choose the verdicts they approve of. You can’t re-try by shopping around for a judge to write the report you want.

His comments about how the process has been botched up are spot on.

For a more nuanced post Andrew Geddis has written this.  He wonders at the selectiveness of the leak.  A finding that innocence has been proved beyond reasonable doubt may mean that the new report writer agrees with Ian Binnie that Bain is innocent on the balance of probabilities.  Geddis also discusses the test to be applied.  He correctly identifies that proof of innocence on the balance of probabilities is the apparent threshold with a further requirement that extraordinary circumstances also be shown.

Proving innocence beyond reasonable doubt is one possible extraordinary circumstance.  Being the subject of a botched police inquiry could be another although this Government will never want to acknowledge that this occurred.

And if  you want a sharp spot on comment I offer you this from ACT MP David Seymour.  This is possibly the first time ever a Standard writer has agreed completely with something said by an ACT MP.  I have screen shotted it for posterity. 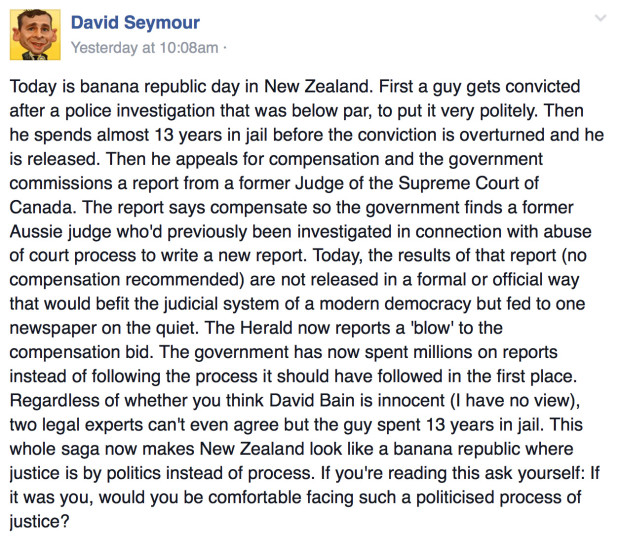 Seymour is right. What is happening here is banana republic stuff.  We should all be very uncomfortable with what is occurring.  And the Government needs to launch an inquiry.

47 comments on “The responses to the Bain report leak ”