The right to free speech

This week has seen a number of examples where right wing and religious men have said stupid things and then had their statements defended on the basis that free speech should be protected.

Who is the white dude of the year?

Ben Torkington has proposed on twitter that there should be a white dude of the year competition.  Who should be the inaugural winner of this esteemed competition and why?

NZ First: We could and should be doing better

NZ First chose to be inside Cabinet in a full coalition. I’d rather expected that they would choose to be in a confidence and supply agreement as they did with Labour back in 2005. That they decided to take the risk despite their previous experience with National is a stunning level of trust. But they work well with Labour.

Duncan Garner reviews National’s record, and is not impressed: “Because the list of blind spots for National is too long. If this is success then our standards have slipped.”

Trying to wedge the Greens

The political right try it on every election year, in an attempt to sow a bit of discord. I expect this sort of obvious and clumsy wedge politics from Hooton and the like, but I was a bit surprised to see Duncan Garner having a go.

English is a less convincing liar than Key.

Duncan Garner reckons the government is “missing in action” on housing. Similar pieces could be written about poverty, pollution, the rising debt, carbon emissions, the use of NZ as a tax haven, etc.

Reaction to Key’s land tax has been luke warm at best, with strong calls for more effective action. Labour is promising “a ‘tidal wave’ of big housing reforms”…

Who is buying Canterbury water?

Billions of litres of Canterbury water are being sold off. Duncan Garner asks if Oravida is the buyer.

Garner on Key vs Clark

Attracting a fair bit of comment this morning – Duncan Garner on Key, Clark, and the nature of their legacies.

A review of some commentary about the leak of information from the Bain compensation claim report includes a comment from David Seymour which is surprisingly good. 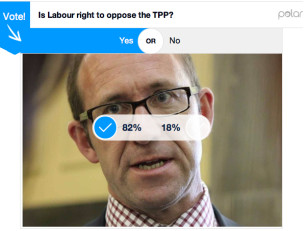 In which Duncan Garner goes trolling with a great Christmas beatup, and gets taken to task for it.

Bread and circuses. Hold the bread.

Peter Lyons hits the nail on the head in Nothing but spin coming from our Government. Garner misses the point in National gets a case of the dreaded third-termitis.

Paddy Gower and Duncan Garner don’t understand our electoral system: “that’s MMP”. By-elections are pure First Past the Post – and that’s why Andrew Little didn’t need to do a deal, and Northland doesn’t stink like Epsom.

Duncan Garner asks – “when we’ve just borrowed $55b over 6 years how on earth are tax cuts suddenly affordable?”. Presumably it’s a rhetorical question…

This week’s Jonolist award goes to….

Jonolist award to Patrick Gower for slanted reporting of a non-poll result, continuing his anti-Cunliffe lines.  Special mention to 3 News report on The Vote bovver boys, against affordable housing for those in need, forcing a “back-down” from Turei on lowering house prices. Need better MSM.

Much a coup about nothing

Apparently there was a coup in Labour last night. Missed it? So did Labour. Looks like what really happened was that someone played Garner / Gower. Perhaps the problem lies with relying on well-known Labour insider Cameron Slater as your source.

Not in the public interest

Some prominent “journalists” are working to undermine Labour and a possible Labour-Green government: one that could turn against the neoliberal scam that such “journalists” feed off. The left should take heart – the time has come to support the “public interest”, as outlined by Nicky Hager.

Key has refused to include the leaders of minor parties in TV3 debates, and Goff has agreed to debate one on one.  Another step towards “presidential” style politics that does not serve our country well.

Not a good look

I’m not going to take sides in the dispute between Brian Edwards and Duncan Garner over Garner’s targeting of Chris Carter. Edwards attacks Garner’s professionalism. Garner responds by attacking Edwards’ politics. The level of behaviour all round is unimpressive. The only one who comes out looking good is Margaret Bazley.

A few months ago Brian Edwards suggested that TV3’s chief political reporter Duncan Garner was on a personal vendetta against Chris Carter, an observation also made on several occasions by Bomber Bradbury, Dimpost and The Standard. At the time Edwards invited Garner to refute the accusation that Garner had a vendetta against Carter, suggested by the […]

Phil Goff has put some good solid (if rather moderate) left-wing substance on the table in his pre-budget speech yesterday. Duncan Garner says that was the right move, but wonders if Labour now needs to focus on the questions surrounding John Key. Garner says in the wake of several questionable moves Key’s integrity is now on the line and Labour should exploit it.

Journos on the declining state of journalism

“Gov-Gen to attend PM’s funeral”. To me, it says a hell of a lot about the state of the media in this country that a sub-editor, or whoever they have writing headlines these days, does not know the difference between a president and a prime minister, and that no-one else at Stuff spotted the mistake before it went up.

Rachel Maddow has a look at exactly how much Fox News just makes stuff up and calls it news. It uses selectively edited stories like the ACORN ‘pimp’ story, the ‘climategate’ e-mails, and many other highly inaccurate ‘stories’, and promotes them for ratings.

In effect Fox News is the (un)official spin channel for conservative activists to peddle garbage entertainment on. Have a watch of Rachael as she tears the facade of conservative story telling apart.

3News viewers were left wondering if Duncan Garner is still pissed after the long weekend tonight. Using material that has clearly come from Jason Ede in Key’s office Murray McCully, Garner played the message-bearer for National’s continuing attacks on Labour’s gay MPs. It makes me heave that Garner, one of the best journos in the country, should lower himself to become part of this dirty, homophobic campaign.